By Christina RadishThe key point for us:More information on the so-called Wolf Moon from FarmersAlmanac.com:

Full Moon Names and Their MeaningsComment:  At least the Farmers Almanac attributed the moon names to a particular region rather than all of Native America. That's more than Davis and Mulcahy did.

But I doubt the Farmers Almanac has the slightest credibility when it comes to Native lore. I'm guessing it's been repeating these "moon" stories for decades or centuries since someone made them up.

Here's a list of American Indian Moons from 29 tribal cultures. The cultures include half a dozen in the Almanac's New England to Lake Superior range, and specifically the Algonquin. So how many used the term "Wolf Moon"?

Answer: Zero. The Algonquin name for January is squochee kesos, meaning "sun has not strength to thaw." The only January name that even mentions wolves is the Sioux "wolves run together." The Cheyenne use this as one of their names for December.

What "Wolf Moon" tells us

"Wolf Moon" seems to be a myth, perhaps concocted by the Farmers Almanac. It continues because most people think Indians have one continent-wide culture. And it apparently involves a lot of wolf worship. When Indians aren't running or dancing with wolves, they're soaring like eagles or hawks. Or running like buffalo.

This bit of stereotyping sends a lot of messages. Native religion is nothing more than animal worship. Indians have a mystical connection with nature. Indians are more animal-like than "real people." Indians lead romantic lives of following their hearts and their "spirit guides." No mentions of smallpox, broken treaties, or genocide here!

The image below kind of says it all. The Wolf Moon concept, supposed used in the East, is represented by a Plains chief. It doesn't matter whether the term is accurate or where it's used. It's all about homogenizing and romanticizing Indians, which is part of denying their modern-day existence and diversity.

No doubt Davis and Mulcahy didn't intend these messages. But I bet they didn't do anything to contradict them, either. I bet there's no Indian in Teen Wolf to explain "Wolf Moon," say it's limited to a certain region or made up by the Farmers Almanac, and give an authentic Native term instead. Because it's easier to keep Indians invisible and contribute to the problem.

For more on the subject, see Twilight Ruining Indians' Reputation? and Differeing Views of Wolves.

P.S. This posting is not to be confused with Moon Wolf in UNCANNY X-MEN. 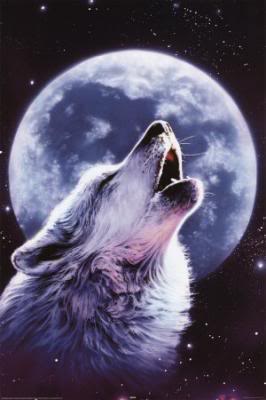