Indian in Worse than Rotten, Ralph

Educator Debbie Reese notes another stereotype in a children's book:

Worse than Rotten, Ralph by Jack Gantos and Nicole Rubel 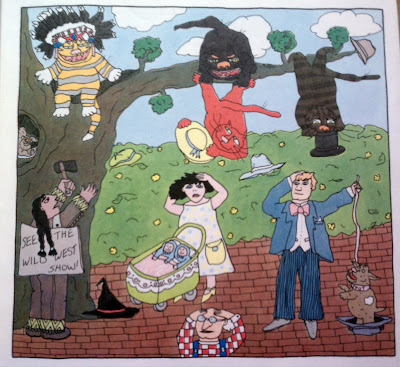 Comment:  Ralph is the orange cat in the middle. In this scene, he's met up with some alley cats and gone to the park. There one cat steals a headdress from an Indian.

Moreover, I don't think tomahawks were common among the Plains Indians. Any way you look at it, juxtaposing a chief and a tomahawk in a peaceful setting is wrong.

The authors make a pretense of explaining the Indian's presence with the sign he carries: "See the Wild West Show!" What does this tell us about the Indian?

None of these possibilities is a good one. Any way you look at it, the character is conveying the standard chief and tomahawk stereotypes. He's also sending other negative messages depending on how you interpret him.

Finally, let's pretend that there is a Wild West show in town and this Indian is one of the participants. In other words, let's take this illustration at face value. It is what it seems to be.

In addition to the problems listed above, the concept of a Wild West show is stereotypical. This was true even in the heyday of Buffalo Bill's Wild West shows. It was still true whenever this story took place--sometime in the mid-20th century, perhaps. And if there are any "Wild West shows" still operating, it's true today.

Even if a show presents a Plains chief exactly as he appeared in "real life," it would be stereotypical. Why? Because it's reinforcing a limited, one-dimensional idea of who Indians are. There are no Indians from the Tlingit, Hopi, Seminole, or Oneida tribe in a Wild West show. No Indians who are farmers, teachers, doctors, or lawyers. The Indians in these shows are almost always chiefs and warriors from Plains tribes.

That's a tiny slice of the totality of Native life across the Americas. Because Wild West shows reiterate and reinforce what everyone believes about Indians, these shows are stereotypical even if they're "true." The lack of breadth and depth, of balance, is what makes them stereotypical.

So we have a comical chief wandering around a park for no reason. He may be a primitive traditional Indians who's out of place, or a non-Indian who's playacting. And the show as well as the "Indian" is purely stereotypical.

That's like three strikes in one illustration. Again, imagine if the illustration showed a Mexican peasant in a sombrero. Or an Asian peasant in a coolie hat. It would be so obviously wrong that no one would think about allowing it. But no one since the book was published in 1978 has thought to question the comical Indian chief.

Below:  "Hey, gringo, how come I'm not in this illustration too? I also like to walk around urban parks in a comically inappropriate costume."