Natives suffer the most violence

Natives Targeted Most for Hate Crimes

By Valerie TalimanComment:  As usual, it's difficult to disentangle factors such as poverty, crime, and substance abuse. But I maintain that racism and stereotyping are a huge part of this problem. Non-Native see Natives as inferior--as bums, drunks, whores, losers. I.e., as remnants of a race of primitive savages and squaws.

We've spent 500 years stoking a righteous, "civilized" hatred of Natives. This happened before many Indians became alcoholics, were herded onto reservations, grew dependent on government handouts. So I don't think we can point to any particular social cause such as poverty.

No, white Christian Euro-Americans have hated Indians since the beginning. Indians reminded them that their lives were controlled by monarchs, lords, popes, bishops, and other wealthy aristocrats. I.e., that they weren't free to believe and act as they wished. Indians were the "other" who revealed the lies and hypocrisies of Western civilization, so they had to go.

For more on violence against Natives, see Hip-Hop Culture in Alaska and Reviews of The Silence.

Below:  An inviting target for "good ol' boys" bent on proving their manhood. 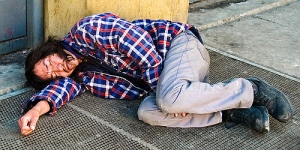 It got worse. South Dakota passed a hate crimes law, but for all intents and purposes, it's a law to keep Indians from committing any crimes against whites. Muggings have been prosecuted as hate crimes, while murders of Indians with a spraypainted swastika to mark the site have not.