Comment:  Naturally, this revelation led to more rants on the subject. Including this mini-dialogue with someone on Facebook:

‎"Johnny Depp reveals origins of Tonto makeup"--he fabricated it from a painting with no basis in historical reality.

I'm glad to see that all of us who guessed Depp's source and motivation were basically right. He "honors" and "respects" Indians by inventing one out of thin air. Just like a million hipsters, New Agers, and other wannabes.He could've researched the Comanche of Texas and made Tonto look like one of them. Tonto is an invented member of a real tribe and a real race, not some sci-fi creature from another planet.

When Hollywood starts inventing looks for gold prospectors and Cavalry soldiers--some of Tonto's contemporaries--then it can invent Tonto's look too. Heck, let's put a crow on everyone's head: the Lone Ranger, the schoolmarm, the saloon-keeper, et al. What's the justification for singling out the Indian for this treatment?

It's the same reason cartoon Indian mascots are wrong but cartoon cowboy or pirate mascots are okay. One discriminates on the basis of race and is thus racist; the other doesn't.I think he was unspecified in the original, made Apache in one or two versions, and is considered Comanche this time. The setting is Texas in the mid-19th century--the Lone Ranger is a former Texas Ranger--so the primary choices are Comanche or Apache. You'd have to stretch to imagine a Tlingit, Cree, or Mohawk Indian in that time and place.

Note what sounds like a disconnect between Depp and Sattler. Depp thinks the crow is flying behind the Indian's head. Sattler talks about the "headdress"--but the only thing resembling a headdress is the crow. Ergo, the crow must be on the Indian's head, not behind it.

An Indian with a spirit animal on his head...why not? Apparently Depp thinks all Indians are touchy-feely mystics who talk to animals, commune with the dead, and so forth. They're supernatural beings, like warlocks, elves, or fairies, not real people.

Let's also note that we can dismiss the Depp defenders who said he wouldn't stereotype Indians, he has no control over the costume, etc. You were all very, very wrong.

As I thought, Depp's understanding of Indians is superficial and stereotypical. If you saw his "Cherokee" tattoo of a Plains chief in a headdress, you might've guessed this. 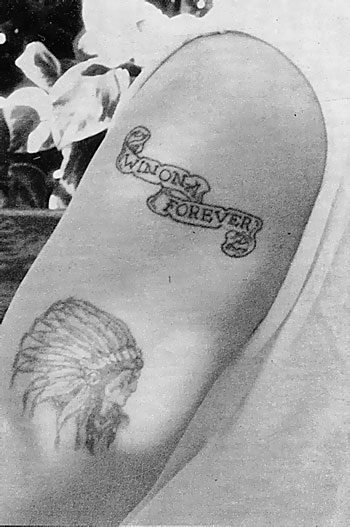 Depp's motivation is the same as those who dress up as Indians for Halloween or beer parties: "I wanna look like my fantasy of an Indian."

How a Hollywood star thinks: "I saw a funny-looking Indian somewhere. I'll use that look in my big-budget movie and cement it in people's minds worldwide."

This is why you cast Natives, not wannabes, to play Natives. Even if Depp does everything right in the movie, his "spirit animal" costume and character will influence millions of opinions. A non-Native is determining what many people will think about Indians for years to come.

For more on Johnny Depp and his costume choices, see Tonto as a "Spirit Warrior" and Johnny Depp in a Crow Headdress. For more on the issue of his playing Tonto, see Open Letter to Johnny Depp's Tonto and Why Tonto Matters.
Posted by Rob at 5:10 PM

Awful, so annoyed and saddened by this and agree with you completely.