Tonto as a "spirit warrior"

Rose helped the actor come up with his now iconic Captain Jack Sparrow costume for the "Pirates of the Caribbean" franchise.

By Elizabeth SneadComment:  Not surprisingly, the Pirates designer came up with Tonto's Flying Nun look. This article implies what I thought: that they're making up Tonto without reference to actual Native clothing or culture.

And they're calling Tonto a "Spirit Warrior," which raises a red flag. Because all Indians are spirit warriors, right? Who talk to ghosts and animals and stuff?

I wonder if we're going to miss the days when Tonto was just an average Joe with no "spiritual" beliefs.

There's absolutely no truth to the rumor that with his crow headdress, Tonto will be able to fly like the Flying Nun. Because that would be silly.

What are the odds of Depp's Tonto being a normal guy like Chief Dan George in Little Big Man? I'm betting he'll sound all wise and spiritual like a bad fortune cookie. "When the raven flies, your destiny awaits." Stuff like that.

Johnny Depp wanted a parrot in Pirates of the Caribbean. Instead he got a talking raven in The Lone Ranger. It's his spirit animal and it whispers secrets to him.

Tonto: How long till we get there?
Raven: Nevermore!

Penultimate Fake Indians say: "We love Johnny Depp's crow headdress! It's all weird- and ethnic-looking! Like he's from a different planet or something!

‎"And he looks like he's crying. He's sad because of all the bad things done to his people. Poor sad Tonto."

My buddy Ron and I discussed the "spirit animal" concept:I think most of the "spirit animal" thing is New Age mythology, not genuine Native belief. If it's genuine, it probably happens most most often in dreams or on vision quests. People don't carry an animal around or expect answers from one on a daily basis.

As for his looks, I kind of thought Tonto would look like this--not like Thor with waist-length hair and a winged helmet. 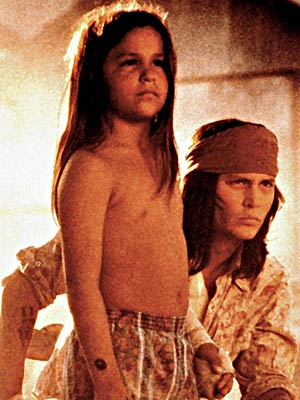 To be fair, winged helmets aren't even really true for the Vikings. LOL (Also, the song played at weddings is really just before the groom murders a bunch of people. Because it's Wagner.)