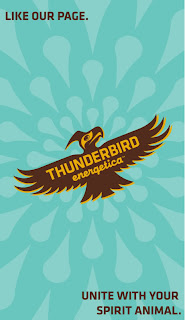 More from the Thunderbird Energetica website:Intimate relationships? I'd be impressed if the founders had ever been within five miles of an uncaged catamount (puma), jaguar, or white-tail (deer).

Exchange with the owner

In response to e-mails, the company founder sent this "apology":To which Adrienne responded (in part):Comment:  The Thunderbird Energetica brand is reminiscent of other instances of hipster racism we've seen recently:

In particular, it reminds me of the racist Teepee Games website.

It's time to get a clue, people. Referring generically to tribes, vision quests, and spirit animals doesn't inoculate you from charges of cultural misappropriation. Nor does claiming you're doing it as an "honor" or a joke. You're still stereotyping Native people as exotic, strange, or otherworldly.

For more on the subject, see Why Tonto Matters and Ignorance or Malice?

Email ThisBlogThis!Share to TwitterShare to FacebookShare to Pinterest
Labels: Stereotype of the Month, stereotypes, supernatural