Comment:  I gather the Australian show is called Sunday Night. And "Freakshow TV" is the name of Survival International's campaign against such shows.

For more on Amazon Indians, see Morcegos in The River and Brazilian Indians Protest Site Conversion.

Below:  "Paul Raffaele said a Suruwaha girl refused to shake his hand because she wanted to kill him. In fact, he was wearing so much sun cream the Suruwaha thought he had a skin disease." 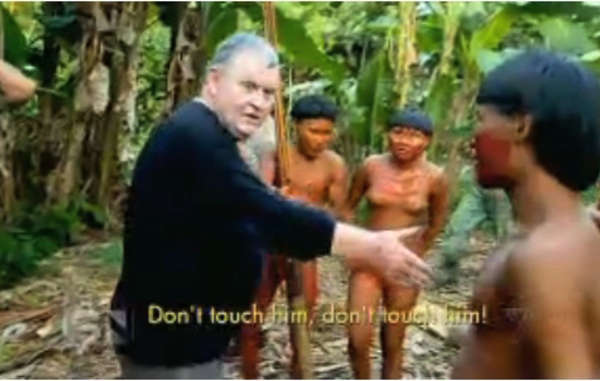 Your blog is a lot harder to use since you got that new background. The scrolling works only sort of now, in fits and starts. I don't know if it is the background that dogs down the page, or other changes from Google Blogger that coincidentally came at the same time. And I have a very high speed internet connection.

Jaine: Are you speaking of the group that denied indigenous (non-white ) Australians the right to vote until the late 1960s?

Dmarks - yes I am referring to that group. I talking about the country where Aboringal deaths in custody remains high, where the government still holds on to stolen wages, where the government interferes and pays Aboringals in vouchers because it doesn't deem them fit to be paid in money...(believing them all to be alcoholics) all this is still happening.

Survival International is actually based in London. They used to have a documentary where this guy would go native, usually in Papua New Guinea for some reason.

dmarks: There's also the stolen generation: Aboriginal children who were taken from their parents and raised in white (and sometimes not even Australian) homes. So basically, it's the same old song with a different singer.

This kind of crap is the stuff the UN lists as genocide.