By Ruth MoonComment:  Despite the company's denial, the trucks' status isn't clear. Were they carrying "treater vessels" to separate oil and gas or empty water containers?

Gotta say the cargo looks more like giant pipes than "empty containers for drinking water." Unless the so-called containers are huge water tanks, I suppose. The company needs to explain itself better if it expects anyone to buy its story. 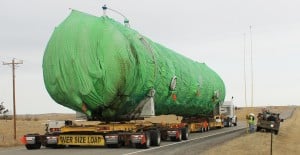