Recently a sports uniform blog reported on a reader's effort to educate people about Indian mascots:

What Do You Mean ‘We,’ Paleface? This is nothing new, of course. It's similar to the satirical Fightin' Whites team created a decade. Countless columnists have noted that we wouldn't tolerate teams named Blacks or Blackskins, Jews or Kikes, etc. Indeed, it's an obvious way to point out the offensiveness of the Washington Redskins and other Indian-themed nicknames and mascots.

Several of my colleagues applauded the Whiteskins parody. My opinion is that it and the Fightin' Whites parody were too tame. Now I've found an old Tim Wise column in which the author agrees with me.

By Tim WiseComment:  For more on the subject, see Redskins, Brownskins, or Blackskins and Whiteys vs. Darkies vs. Redskins.

Below:  Equivalent mascots? Nope. The Indian is much more stereotypical. 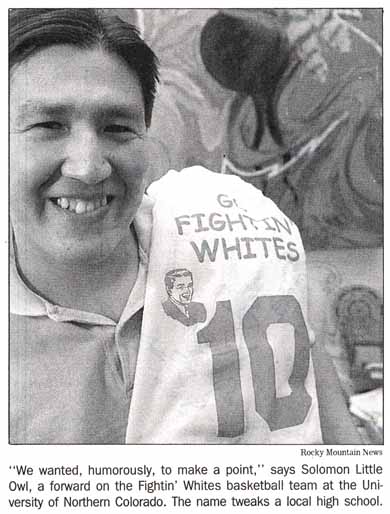