I've explained why stereotypes matter about a thousand times, but Adrienne Keene does an excellent job of it in her latest Native Appropriations post:

Let's reiterate the key point:These arguments are relevant to most stereotyping issues. Take Indian mascots, for instance. If they comprised only one or two of every 100 Native images in the media, no one would pay them much attention. They'd be like the Fighting Irish or the leprechauns on St. Patrick's Day: almost irrelevant compared to the politicians, executives, actors, and other famous people who are Irish.

But mascots and similar images comprise the vast majority of what Americans see when they see Indians. These stereotypical images control and determine what Americans believe about Indians. It's a form of brainwashing--and I suspect movies and television are the most effective brainwashing tools ever invented.

The same applies to "jokes" about Indians, hipsters dressed like Indians, New Agers and wannabes pretending to be Indians, etc. All these things generate false impressions in people's minds. We think Indians are primitive people of the past because our culture and media tell us so.

The problem is simple and so is the solution. The beliefs won't change until the images that create the beliefs change. That's why Tonto and Indian mascots and hipster headdresses matter.

For more on the subject, see Tonto as a "Spirit Warrior," Johnny Depp in a Crow Headdress, and Sources for Depp's Crow Headdress. 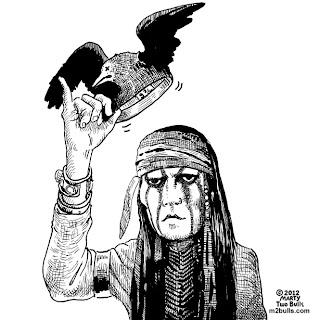 At some point in the 20th century, white people decided rather quickly that Indians were either 1) random four-bit mooks (Seriously, the old Westerns show Indians behaving exactly like the enemies in Tempest.) or 2) magical fantasy creatures. A third option, people getting rich off casinos and oil money, wsa offered by Ronald Reagan in the 80s, because Reagan, well, Reagan was, ah, "special". (Probably too many advanced glycation end-products from all those jellybeans.)

It would be interesting if people interpreted every one of Natalie Portman's roles as being indicative of Israelis. Padmé especially. (Considering Sand People are basically Space Indians dressed like Bedouins.)

However, she was also in V for Vendetta, which lets me express my issue with right-wingers while alliterating: Verily, in my view, I doubt the vague veracity of villains of the vox populi vis-a-vis veterans of verification. How it vexes me, the venom of these virulent vermin against venial vice, a vendetta, held as a votive, where the only valid verdict is vengaence; versus these men, one must remain vigilant.

(That, and you've never wanted a Guy Fawkes mask as much as the day Tunisia was taken down.)