Johnny Depp in a crow headdress

Last week everyone was talking about this photo released from Johnny Depp's Lone Ranger movie: 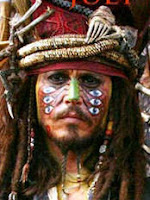 Depp's Tonto is supposed to be Comanche. This may be an authentic Native look, but I doubt it's Comanche. The bandanna looks Apache, for instance, not Comanche. I also doubt an Indian would wear a headdress and warpaint as his everyday look.

Even if Tonto's look is 100% authentic, it's not a standard look for someone going about his business. It makes Tonto look freakish, like an unnatural "other," not like a regular guy.

Let's hope he wears this outfit only occasionally in the movie. Like when he's going to war. If this is his default look, it's probably a bad sign.

For more on the subject, see Lone Ranger Movie Rides Again and Depp Unsure of His Native Ancestry.
Posted by Rob at 6:32 PM