August Schellenberg guest-starred as a Navajo patient in Grey's Anatomy Thursday, November 13. Here's a summary of the subplot featuring him and Dr. Dixon (Mary McConnell), the new heart surgeon with Asberger's Syndrome:

By Andrea ReiherComment:  Schellenberg (Mohawk/Swiss-German) doesn't look Navajo to me. It would've been nice if they'd cast a Navajo actor to play the patient. But that's a minor criticism. These days, it's good if they cast a Native to play a Native role.

At the Red Nation Film Festival's diversity meeting, Yvonne Russo said this episode was stereotypical. She was referring to the Navajo's mystical talk, his connections to ghosts. She wanted to see a Native play a doctor without wearing his "Indian-ness" on his sleeve.

Russo has a point. But the Navajo's beliefs helped distinguish him from a run-of-the-mill patient. And he turned out to be smarter than the scientific Dr. Dixon. The hospital was haunted by Denny's ghost and perhaps by others.

True, we've seen far too many "mystical Indian" characters. But Indian characters with no Indian traits lie at the opposite end of the spectrum. If you can't tell an Indian character is an Indian, I don't see that as an improvement.

People of color should be colorful

Consider some of the great "people of color" characters on TV today. For instance, Neela Rasgotra (Asian Indian) on ER, Sayid (Iraqi) on Lost, and Christina Yang (Chinese) on Grey's Anatomy. These people don't talk about their ethnicity constantly. They don't exhibit (many) stereotypes. But they give occasional clues about their backgrounds that tell you who they are. It's impossible to mistake them for plain white characters.

Until then, we can only hope to see a range of Indian characters. We saw Adam Beach on Law and Order: SVU as an officer with almost no Indian traits. Now we've seen August Schellenberg on Grey's Anatomy as a mystical Indian elder. Both types of characters are better than nothing, but let's hope we'll see some three-dimensional Indian portrayals someday.

Below:  August Schellenberg as Sitting Bull in Bury My Heart at Wounded Knee. 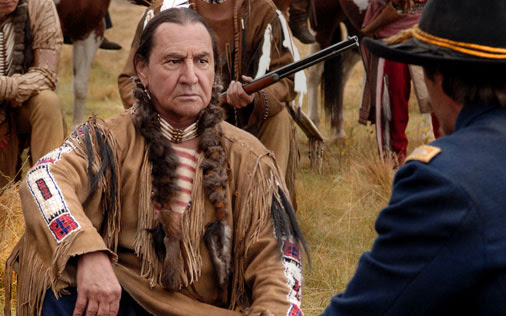