Taylor Lautner in My Own Worst Enemy

Tyler Lautner, Twilight star and Hollywood's version of a Native, is a semi-regular on the NBC series My Own Worst Enemy. He plays the son of Edward Albright, the secret agent with dual personalities.

Just as Lautner doesn't look like an Indian, he doesn't look like his "parents": actors Christian Slater and Madchen Amick. He still looks Latino and Asian to me. But he's tall--perhaps close to 6'--and he can fake some martial arts moves, so he has a physical presence. And based on the few line he's uttered, he's a reasonably good actor.

This is not the type of show I'd count when searching for Natives on the air. And like Easy Money, it's been canceled. But kudos to the networks for putting another show that isn't a pure knockoff on the air. And for casting such diverse actors as Alfre Woodard and Taylor Lautner. 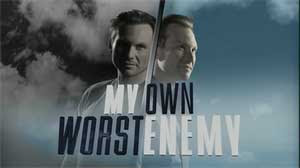 Actually launter is a world champion martial arts expert - so he doesn't fake a few martial arts moves.. He ended up winning three gold medals and becoming the Junior Worlds Forms and Weapons champion. Just to get the facts straight. Boy you seem to have a grudge against this kid.

Lautner is Ottawa and Potawatomi

Taylor Lautner IS A FAKE NATIVE