Column:  American Indian Heritage Month seems to have been put out of mindComment:  This month has seen several Native film festivals, public TV specials, and powwow-style fairs and celebrations. These activities are what we might call the usual suspects. They "speak" to people who already are interested in Natives and seek information on them.

We haven't seen many outside-the-box efforts to raise non-Natives' awareness of Natives. I'm not even sure what it would take to get most people thinking about Indians. We need the modern-day equivalent of the peaceful protest: e.g., the takeover of Alcatraz or the Kootenai tollbooth "war."

And no, I'm not talking about Russell Means's toothless declarations re his Republic of Lakotah. Painting teardrops on Mt. Rushmore's faces under cover of night, as in the movie Skins, probably would be more effective. 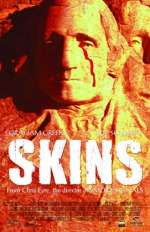 Email ThisBlogThis!Share to TwitterShare to FacebookShare to Pinterest
Labels: holidays

I'm just not hearing anything about this "out there". I only encounter it on this web site.