Native blood:  the truth behind the myth of 'Thanksgiving Day'Comment:  For more on the subject, see Ten Little Pilgrims and Indians. 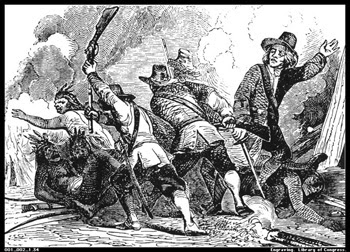 None of the information contradicts what I have read elsewhere, but the link you provided is an extreme Marxist left-wing fascist site, and their main page is trumpeting the successes of dictator Hugo Chavez. No doubt they support genocide against Natives if the Natives are capitalist anti-revolutionary or whatever (like the Miskito Indians in Nicaragua who faced genocide at the hands of the Sandinista socialists in the 1980s).

More guilt by association? Like many websites, Links has a series of news items on its home page. The first three items just happen to be about Chavez because Venezuela just happened to hold regional elections. Next week there may be no mention of Chavez on the site.

What the organization actually touts on its home page is this:

Links seeks to promote the exchange of information, experience of struggle, theoretical analysis and views of political strategy and tactics within the international left. It is a forum for open and constructive dialogue between active socialists from different political traditions. It seeks to bring together those in the international left who are opposed to neoliberal economic and social policies, and reject the bureaucratic model of 'socialism' that arose in the Soviet Union and Eastern Europe. Inspired by the unfolding socialist revolution in Venezuela, Links is a journal for 'Socialism of the 21st Century' and the discussions and debates flowing from that powerful example of socialist renewal.

As we discussed before, there's no necessary connection between socialism and communism or totalitarianism. Many socialist governments and movements are democratic.

More to the point, socialism isn't the same as Marxism or fascism. You're confusing the terms in an attempt to smear anyone who isn't a right-of-center capitalist like you.

I suspect the Links people admire Chavez for the same reason Evo Morales admires Che Guevara. Namely, for his revolutionary ideals, not for his controversial methods or results.

And if you check the three Chavez items currently on the home page, you'll see absolutely nothing that champions Marxism or fascism. In fact, the YouTube video notes how conservatives made gains in the recent election, thus proving the soundness of Venezuela's democracy.

In short, this is worthless fearmongering, not intelligent discourse. I suggest you try again.

The overriding point, which you barely acknowledge, is that author Mike Ely hasn't endorsed Links and Links hasn't endorsed him. For all you know, the website may post items with which it vehemently disagrees. In a society with a free press, publication does not imply endorsement.

After all, you can find plenty of right-wing quotes--from Adolf Hitler to George W. Bush--on Blue Corn Comics. That doesn't mean I endorse them or vice versa. I post a lot of things I disagree with so I can expose them to the light of day.

In short, as I said in my first comment, you're engaging in guilt by association. It's a silly "debate" tactic and I'm pointing it out. If you still don't realize how illogical and irrational it is, read about it here:

An association fallacy is an inductive formal fallacy of the type hasty generalization or red herring which asserts that qualities of one thing are inherently qualities of another, merely by an irrelevant association.