Also nice that the monument is in Nebraska rather than the Far West. The eastern portion of the Lewis and Clark expedition doesn't get enough publicity.

For more on the subject, see Statue of Crouching Sacagawea.

Below:  "Artist Oreland Joe stands with the sculptures he created in front of the First Council Casino in Newkirk, Okla." (Photo by Lester Harragarra) 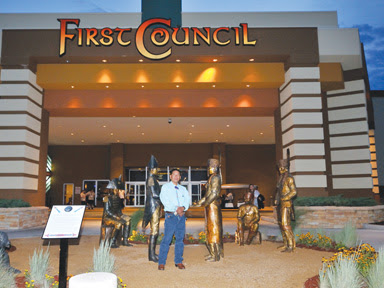 I don't often see buildings with logos that look like they came from a small-press comic book!

Yes, I thought about that logo too. It certainly seems more casual than the usual casino logo.

Have a fund-raiser to add a Sacagawea statue added. Accept donations in Sacagawea dollars, of course.

By the way, I love seeing this type of thing in a casino lobby.