Shamans did it for sex and money?

Do Shamans Have More Sex?

New Age spirituality is no more pure than old-time religion.

By Robert WrightComment:  A lot of Wright's Native American examples rely on Eskimos. The Eskimo cultures were small, isolated, and unrepresentative of the rest of the Americas.

Moreover, relying on the written records of early anthropologists is fraught with peril. Many of these "scientists" were badly biased against their subjects and didn't have a clue what they were recording.

Some specific thoughts on Wright's claims:

1) If the "fakery" cured the patient, it's not exactly fakery. I suspect some shamans were staging supernatural or psychological "plays" for the patient's benefit. The goal was to persuade the spirits to heal the patient, or the patient to heal himself.

I think this is the same idea as "sympathetic magic." You know...stick a pin in a "voodoo doll" and the person it represents feels pain. Stage a "fake" act of healing and the spirits will accomplish the real thing.

Some of this may just be the clever shamans employing the placebo effect to help their patients. I think it's well documented that if you pretend to do something to heal people, they'll often heal faster. Again, "fakery" isn't the correct term if the process works.

2) Trading goods for services isn't exactly "payment." Not unless the "fees" are specified and the payment is mandatory. Many payments may have been voluntary gifts of gratitude.

How many doctors in Western societies work for free? Not many. I'm guessing traditional shamans gave away their services a lot more often than today's doctors do.

3) Wright offers only one real example of shamanic sex. That is, one example of "some Eskimos" (how many? One or two bands out of a hundred?) taken from a book published in 1954. If that's the best he can do, I'd recommend leaving this point out of his essay.

In short, Wright's claims that traditional shamans were just as corrupt and venal as modern healers is unpersuasive. The fact that he didn't even consider the points I raised suggests he isn't presenting a rational argument. Rather, it seems he's prejudiced against "primitive" indigenous religions. 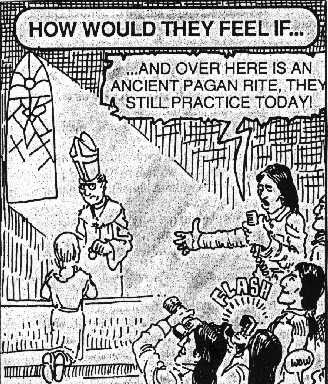 Love the comic. :) It's perfect to accompany this article.

I remember when we were reading... gosh, I think Holy Wind in Navajo Philosophy, but it could have been in one of the videos that accompanied that section of my Native American Religions class. Anyway, an anthropologist interviewed a contemporary shaman, who acknowledged that part of the healing process is for show. People heal *better* when they think you're doing something flashy, rather than something simple. They believe it'll work better if it's a big production -- and because they believe it, it works faster. So the healing is there, underlying the pomp and circumstance, if you will, but the show is just as much for the benefit of the patient as the stuff that "actually works."

If I can find my citation, I'll post it here.

It never fails to amuse me how people expect 'spiritual' individual to be selfless aesthetics. For instance, one woman I met was claiming that a certain Lama sexually harassed her because he asked if she wanted to sleep with him. I pointed out that the Lama in question is not a monk, and that given the cultural differences it was probably good for him to make his intentions so blunt. When she declined, he didnt get upset, so I fail to see what the problem was. She replied that because he is a Lama he should be "beyond all that". Ah, problem revealed.

But native shamans do accept sex and money in exchange for fakery. Good thing Indians don't have shamans. ;)