Michael Horse in Sons of Tucson

Michael Horse guest-starred in the Father's Day episode of Sons of Tucson (airdate: 6/20/10). He played Mike, an employee at the sporting goods store where Ron works. Ron tried to persuade him to come to a Father's Day barbecue, and later he attended.

In two scenes, he got about a minute of screen time. He didn't say anything wise or funny, and no one mentioned his being an Indian. Viewers probably wouldn't have guessed his ethnicity, although his long white hair was a clue.

It's good to see an Indian in a mainstream role like this, even if it's a bit part. It's especially good since Tucson is infused with Indian culture, which hasn't been evident on-screen. Indeed, other than perhaps some exterior shots, I'm not sure Sons of Tucson is filmed in Tucson. 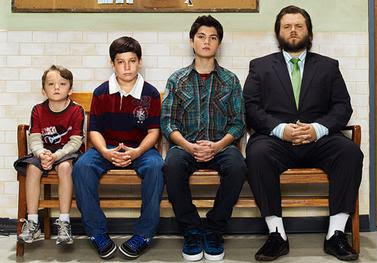 An update on actor/artist Michael Horse:

Horse is an imposing man who has been an activist since the days of the 1969-'71 Alcatraz occupation, owns Gathering Tribes gallery with his wife, and is a multi-generation jewelery maker. He also played Deputy Hawk on TV's “Twin Peaks.” His contribution to the exhibit, besides his silver kachina doll rings, is ledger art--traditional form paintings that he etches onto documents from the early 21st century days of Native American resettlement.