The Impact of Stereotyping on Young PeopleComment:  Let's sum up the key points here: Research with children from 20 tribes shows they get negative self-images from the media. This causes them to feel helpless and alienated, which leads to depression and self-destruction. (The article doesn't make the last point explicitly, but it's obvious.)

The corollary is that eliminating the stereotypes would go a long way to ending the feelings of helplessness and alienation. Which again is obvious. You label someone as inferior (savage, redskin, squaw, etc.) and they feel bad. What part of that is so hard for people to understand?

For more on the subject, see Stereotypical Thinking Causes Racist Results and The Harm of Native Stereotyping:  Facts and Evidence. 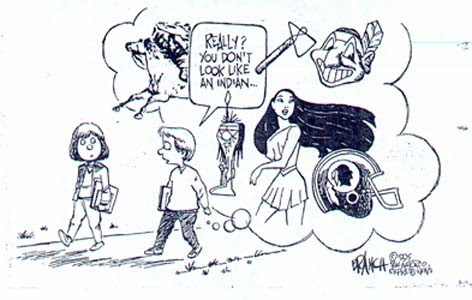