Thanksgiving pageant in The Blind Side

In the 2009 movie The Blind Side, SJ, the son of Sandra Bullock's character, plays an Indian in his school's Thanksgiving pageant. Naturally, SJ is dressed as a Plains chief. And not just as an average chief. SJ's headdress has the feathered side panels trailing to the ground. I believe this means SJ is an especially revered chief--sort of a super chief.

And yet...as SJ reveals, he's only playing "Indian #3." The implication is that the real "chief" and another "Indian" were dressed even more gaudily than SJ. This Thanksgiving feast must've resembled a chiefs convention.

In other words, The Blind Side missed the mark even worse than movies and TV shows usually miss the mark when discussing Thanksgiving. Gosh, I can't imagine where the public gets the idea that every Indian resembles a 19th-century Plains chief. Maybe from movies like The Blind Side that tell us exactly that.

What's especially funny is that The Blind Side is a movie about race. Sandra Bullock and company are aware that they're sending racially-tinged messages to the audience. They're even aware that their Thanksgiving bit sends a message.

SJ complains that he was the victim of multiculturalism run amok because a Chinese boy got to play the chief (presumably "Indian #1"). His father notes that he's Irish, which is no closer to being an Indian. In fact, the pure-blooded Wampanoag Indians probably were closer to Asians than to Europeans, genetically speaking.

Later in the movie, Kathy Bates as the tutor makes a comment about Sacawagea guiding the Lewis and Clark expedition. She ominously hints that that wasn't the real story. We don't find out what she means, but whatever. The point is that the filmmakers seem to have a smidgen of awareness about Indians.

And yet they get the most basic fact about Indians--that there were no Plains chiefs at the first Thanksgiving--wrong. How stupid is that? Pretty darn stupid.

How the scene should've gone

In the same 30 or so seconds of screen time, the movie could've sent the opposite message. Imagine SJ dressed as a typical Indian "brave" rather than a chief. Here's the dialogue:There you go. Even though the movie is set in the South, this scene shows that the parents are sensitive to racial issues. And that SJ has a bit of white privilege to overcome. That would've been a good setup for the rest of the movie.

As for the rest of the movie...well, you know all those sports dramas about race? Movies like Remember the Titans and Friday Night Lights? This is like them but without the racial conflicts.

There's no drama at home--Michael the black teenager smoothly joins his new family. No drama at school--a few kids look at him funny, but that's about it. And no drama on the field--the worst Michael experiences is one opponent taunting him about his size. The result is a sweet, sentimental film that could've been a G-rated Disney family flick.

The biggest conflict is whether Michael, the gentle giant who wouldn't hurt a fly, will succeed at football. Fortunately, this lamb turns into a lion when you tell him the other team is threatening his "family" (team). Maybe the real Michael was this pliable, but it makes him look like a dumb black guy who couldn't even understand a game.

I'd say The Blind Side is at least half an hour too long. And I don't think Sandra Bullock's performance was an Oscar winner. She seems to be playing her usual tough professional woman with a heart of gold. I agree with those who said she got the award for being an old-school trouper who's produced a solid body of work. 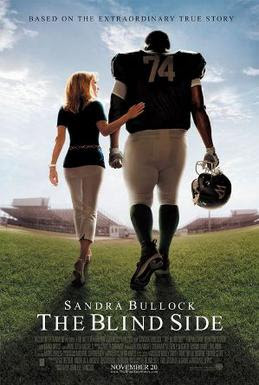 Rob you are wrong on that part. SJ said he traded some free food tickets to one of his fathers restaurants to the kid playing the chief for his headdress do some research before going on a rant please

The real Michael Oher was apparently upset that the character version needed to be prompted into defending his "family." He played football before he even met any of his later adoptive family.

I watched the movie a few hours before writing my review of it, Anonymous. When did you watch it?

I don't recall any reference to the source of the headdress. Maybe you were watching a deleted scene or director's cut?

I didn't say where SJ and the Chinese kid got their headdresses, did I? So what exactly am I wrong about?

I don't see how your comment even affects mine. I'd say we're talking about two different things.

I'm not sure what "research" you expected me to do for a 30-second scene in a movie, but here's a site with a transcript of The Blind Side:

One, this comes from "the screenplay and/or viewings of the movie." So it isn't necessarily the dialogue in the finished movie.

Two, in this version of the script, SJ is fairly clear that he played Indian #3. His father questions this once but doesn't seriously challenge it.

True, SJ makes some ambiguous comment about free Quesadilla tickets. But this has no bearing on the roles the two kids played in the pageant.

SJ presumably rehearsed his role for days or weeks. SJ's father showed up for one performance. Logically speaking, SJ must've known which role he played--namely, Indian #3--better than his father did.

I'm not even sure what you're suggesting. That SJ gave the Chinese boy food tickets in exchange for the headdress? When exactly do you think this alleged trade took place? Before the play? After it?

Actually, it doesn't matter. After the family watches the play, SJ and his mother agree he played Indian #3, not the chief. There's no doubt on that point.

So...no, I don't think I'm wrong about anything. If you disagree, you do some research. Quote the lines of dialogue that disprove something I said.

Yes, that whole "defending the family" bit seemed bogus, Terrie. I'm glad to hear it was a stupid screenplay trick rather than a real-life occurrence.

Here's a review that discusses the movie's mistakes and stereotypes:

As I said, The Blind Side is like a superficial Disney version of Michael Oher's story. If not for a few nice moments, I'd rate it a point or two lower.

Hi Rob, I'm a different anonymous, but I think the 1st anonymous is referring to this particular line from your critique:

"And yet...as SJ reveals, he's only playing "Indian #3." The implication is that the real "chief" and another "Indian" were dressed even more gaudily than SJ. This Thanksgiving feast must've resembled a chiefs convention."

I think they mean that the movie does not imply that the other "Indians" were dressed even more gaudily since SJ traded Taco Bell coupons for the "best" headdress. The movie implies that SJ is the gaudiest inaccurate fake Indian in the play.

First, I labeled my statement an "implication." An implication is an opinion, not a statement of fact. It isn't right or wrong.

Second, SJ's comment about food tickets was too vague to be meaningful. Maybe he meant he needed more tickets so he trade with the Chinese boy in the future. For example, food tickets for the no. 1 role in the next production.

There's zero evidence in the movie itself that a costume trade occurred before the play. And the notion defies the logic of the scene. You don't think the teachers, students, and audience would've noticed that the kids had switched costumes? That the character not dressed as a chief was speaking the chief's lines?

Where's the dialogue explicitly indicating a costume trade? Wouldn't someone have said, "SJ, I thought you were Indian #3. What are you doing wearing the chief's costume?" The characters' unsurprised reactions imply that he was wearing what he was supposed to be wearing.

Rob: With Terrie's reference to "Real", it's clear that he is referring to some source other than the film.

Refering to real-life inspiraction/sources do nothing to invalidate any of the points you make.

"Refering to real-life inspiraction/sources do nothing to invalidate any of the points you make."

Neither would admitting you're wrong about just which kid was implied to have had the gaudiest fake headdress. They're still all gaudy plains headdresses on New England "Indians."