Adrienne Keene of the Native Appropriations blog notes a stereotype she saw at Chicago's O'Hare Airport.

"The Potawatomis didn't have a word for global business center"? 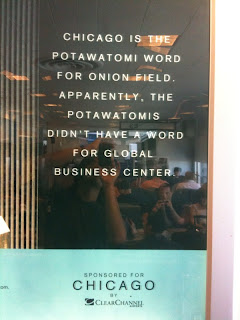 In addition to the past tense, Adrienne notes what's wrong with this ad:And:Comment:  Adrienne notes that Natives who speak their traditional languages are inventing new words for things such as computers and the Internet. And of course many tribes have business centers these days. Some even have international businesses--e.g., the Seminoles' Hard Rock empire.

Fact is, no language had a word for "global business center" in 1781, when Chicago was founded. Founded by a Potawatomi Indian, that is. As we learned before, Jean Baptiste Pointe Du Sable married a Potawatomi and was adopted into the tribe.

I'm guessing the world's languages still don't have a single word for "global business center." English certainly doesn't. That's why it and every other language, including Native languages, use a phrase to describe the concept.

The ad's implicit premise is that Indians somehow missed the boat. That they saw Chicago only as a stinky onion field, not as a potential business hub. This is false, of course. The location already was a place where the local tribes met and traded with French explorers. That's why Du Sable started a trading post there.

We could play the name game with any of today's megalopolises. When the first handful of people founded New York City, Tokyo, or Shanghai, did anyone name it "future global business center"? No, of course not. I suspect that few if any cities have names predicting their eventual greatness.

Let's flip the ad around to make the same point as before. But this time, let's make the Indians active participants rather than passive bystanders:Get the point? Ads like this reflect and reinforce what we think about Indians. Different ads would send a different message. We talk about it here so that future advertising execs will get this message loud and clear.

Email ThisBlogThis!Share to TwitterShare to FacebookShare to Pinterest
Labels: Stereotype of the Month, stereotypes, uncivilized Indians

When people think of Chicago, do they honestly think of "global business center"?

A better version might say that the Potawatomis did not have a word for corrupt machine politics, rampant organized crime, or racial segregation.

Ignorance is bliss in the White man's "business" world when it comes to Native issues. Actually, this is quite stupid. As if Natives could careless about the word "Global Center".
This is reminscent to mocking someone who doesn't own a BMW. What a lame assertion by the White Capitalists who brought this issue up.

Actually, your comment, Geno, ended in a superfluous and possibly racist dig. Chicago has a large and pervasive black community, even in the business realm. Do you know for sure that a white did this?

DMarks,
On a serious note, do you actually believe that the average Native could give a rat's hindquarters about the word 'Global Center'? This is what I meant by plain stupidity. The word itself is meaningless compared to the newer words such as "computers", "email" and/or "internet".
There is nothing "racist" about my last comment. Unless of course, you're overly sensitive about my remarks when it comes to the White man's ignorance???

Geno: I think we are in agreement with Rob's general point and about how dumb this sign is.

Of course there was. You were bashing someone for skin color. Rather, assumption of skin color.

And there is yet another blatantly racist statement from you. I condemn racism from anyone against anyone, and quite consistently.

And you yet again ignore the fact that there is a chance that can't be dismissed that one of Chicago's African-Americans was involved with the sign, instead of a white.

I like our own words for modern conveniences and interpretations of English slang better, as they usually make more sense and are descriptive. Think "information superhighway" vs. "the internet".

English, like most Euro tongues, is a thieving language, and ugly when spoken. At least Indians can say that Native languages are just themselves.

DMarks has a point, Geno. It's better to blame American ignorance than white ignorance in this case.

Assuming "white ignorance" by default for anything in Chicago's is careless and sloppy, especially once you realize that the city is is majority non-white. IF he had said this about 99% white Idaho, Geno's point might have had some traction.

An updated version of the Chicago ad: