Who are your ancestors?

By Ryan HoustonAnd:Comment:  At first I thought this might be a benign activity. People with a tiny amount of common ancestry coming together for picnics and barbecues and such. Harmless on the face of it.

But then I looked a little closer. "Chief Rattle Snake"...a phony name and title held by someone with no right to be a chief. A Southern white guy in Atlanta wearing a culturally inappropriate Plains headdress. And an organization that's supposedly national, so they aren't just meeting at the local lodge to swap stories. 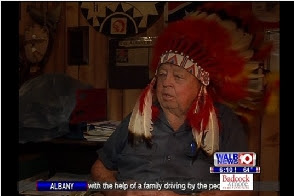 No, these people are classic wannabes. They may be scamming the people who join. "Only $100 to get a certificate proving you're an Indian!" Or they may be hoping to scam the federal and state governments into recognizing them. "A judge said we're an Indian tribe. Now give us our government benefits or let us open a casino."

Fortunately, most government officials know better. Like hundreds of other Cherokee splinter groups, these wannabes have no chance of being recognized as Indians. They'll continue to be what they were born and raised as: white people with a tiny amount of Indian blood.

A demerit to writer Houston for reporting Chief Rattle Snake's claims uncritically. To be an Indian, you have to be enrolled in a federally recognized tribe or accepted by those who are enrolled. The "chief" can call himself whatever he likes, but the vast majority of real Indians would call him a fake.

Then there's the wannabes' veneration of a Confederate flag with an Indian on it. I suspect these people are using the Cherokee gimmick to bolster their claims of authenticity. Not only are they sons of the Confederacy, but also sons of the Cherokee. Their ancestors have been here since 1776...and several hundred years longer. This gives them extra "legitimacy" when they're disparaging minorities and asserting their white privilege.

For more on Indian wannabes, see Whites "Play Indian" in Swamplandia!, Why Wannabes Wanna Be, and "Chiefing" Among East Coast Indians.

Email ThisBlogThis!Share to TwitterShare to FacebookShare to Pinterest
Labels: Cherokee, Stereotype of the Month, stereotypes, wannabes

I wonder if it occurs to them that that man appears to be from a plains tribe. Plains tribes sat out the Civil War.

This is a restatement of what I wrote in "Actual Indian" Defined. I'm sticking with that as my broad definition of who qualifies as an Indian.