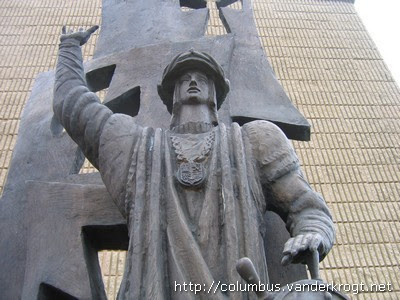 Comment:  I like the overall look of this monument: the abstract ship, the abstract globe, the balance between sails and pedestal. But it fails for several reasons:

1) The head and arms do look distorted and silly.

2) Although it might work in some harbors that need a focal point, kind of like a lighthouse, it's too big for most locations.

3) The "Birth of the New World" title is obviously offensive. Changing the title should be a condition of installing it anywhere.

4) The world doesn't need another monument to Columbus. There are too many of them already.

It's kind of mind-boggling that Tseretelli would build the monument 1) without a guaranteed home and 2) with anatomical flaws that people would surely hate. One wonders what he was thinking.

It would be hard to convert this concept into a monument about Indians, or anything other than Columbus. Even if Tseretelli fixed the flaws, I'm not sure what anyone would do with it. It belongs in Genoa or a Columbus theme park--i.e., somewhere people still honor him for launching the invasion of the Americas.

Another posting says, "Today, Columbus lies fragmented in thousands of pieces of bronze, deteriorating in an outdoor lot next to the Bacardi Factory in Cataño." That's about all it deserves. I'm guessing common sense will prevail and this monument will never rise again.

For more on the subject, see Columbus Statue Defaced on Columbus Day and Columbus Toppled in Venezuela.
Posted by Rob at 3:28 PM

Also, the globe has the unfortunate implication that Columbus came up with the round world.

What would make this awesome would be if there was a cartoon thought bubble right above his head that read: "I knew I should've taken that left turn at Albuquerque."

it's only useful purpose is military target practice

I'm not sure the inverted globe is meant to symbolize anything. It may just be a quirky way of turning a sphere into a pedestal.

Shunned Columbus Statue May Be Erected in Puerto Rico

The Associated Press said that Bonilla, who vowed to keep pushing for the Desecho location, “envisions pictures, T-shirt sales and even helicopter rides linked to the statue.” Madoff commented that “[w]e’re thrilled that there’s so much excitement now about the statue.”

Nearly lost amid the debate over where to put the thing were the voices of protest that it will be erected at all. Twitter user Adonaiman wrote that “Giant Columbus statue in Puerto Rico is like giant George Bush statue in Iraq,” while user vgbnd wrote “A statue of Columbus in Puerto Rico? A celebration of slavery, slaughter and sickness? I don’t think so….” The Aboriginal News Group website posted a petition titled “We the Indigenous people of Puerto Rico and the Caribbean say NO to a giant statue of Columbus,” where a number of the more than 180 signatories have voiced their disgust.

“To erect a statue to honor Columbus is an insult to Indigenous people,” wrote a user from Massachusetts.