Adrienne Keene writes about another example of insensitivity in her Native Appropriations blog:

Gawker uses "Mail of Tears" for a cheap punComment:  Would you make a pun about Auschwitz, Zyklon B, ovens, or the Holocaut? Perhaps with a picture of a Jew in prison garb? What's the difference between that and this, if anything?

For more on the subject, see Actual Indians Crying. 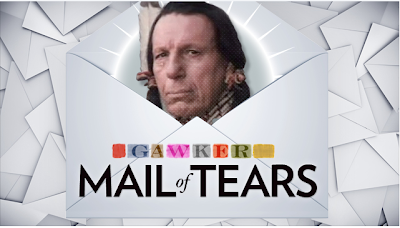 Email ThisBlogThis!Share to TwitterShare to FacebookShare to Pinterest
Labels: Stereotype of the Month, stereotypes, Trail of Tears