After a Native American Ceremony, Vail Gets Blanketed; 'Pray to Ullr'

By Ben CohenComment:  It snowed on a mountaintop in winter? Amazing! That proves Native religion works!

Actually, I've never heard of a snow dance. I wonder if Utes invented this dance recently, perhaps to cash in on the drought. I can't imagine that they danced for snow in the days before central heating.

After all, why would a pre-industrial tribe facing a cold winter want more snow rather than less? Under what circumstances would this tribe seek to increase the likelihood of hunger and disease? Unless you're a ski resort, snow is a drawback, not a benefit. It's an obstacle to survival.

Below:  "Eddie Box Jr., right, of the Southern Ute Indian Tribe performed a snow dance at Vail Mountain on Jan. 7." 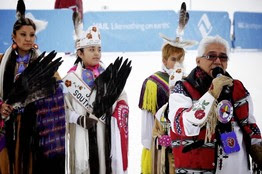