Romney's "47 Percent" Blunder Reveals the Hidden Heart of His Agenda

By Charles Derber and Yale MagrassComment:  Even more than blacks, Indians are the classic example of people whom Americans consider "moochers." They supposedly lost "the war." They supposedly should be grateful for the "light" of civilization. They supposedly get free government and casino checks and don't pay taxes on them.

None of this is more than a tiny bit true. Indians were already civilized, for instance, and usually signed treaties before they lost. But the lazy, good-for-nothing Indian stereotype helps us rationalize our murderous actions. They got what they deserved, we tell ourselves immorally.

Needless to say, the strivers vs. parasites is racist. Most poor people are white, but conservatives think they're brown: African Americans, Latinos, Indians, et al. Demonizing the other--from Obama the "Kenyan" to the poorest Indian who needs government help--is all about maintaining white power.

For more on the subject, see Romney:  47% Are Moochers and America's "Bootstrap Theocracy." 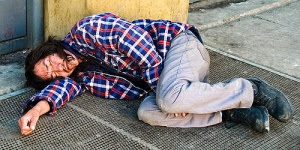 Ironically enough, the Lakota word wasicu refers to parasitism. (It means "steals fat", after all.)