Getting even more publicity than Kateri Tekakwitha's canonization was this photograph taken at the scene: 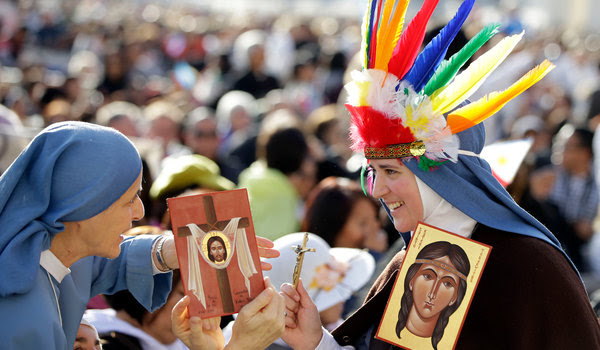 "Nuns held images of Kateri Tekakwitha, the first Native American to achieve sainthood, as they waited for the start of a canonization ceremony celebrated by Pope Benedict XVI, in St. Peter's Square on Sunday." (Andrew Medichini/Associated Press)

Most of the Natives I know were incredulous about this. Some comments from the F.A.I.R. MEDIA (For Accurate Indigenous Representation) page on Facebook:Comment:  Activists often call for boycotts in situations like this. Can we boycott the Pope?

Ironically, the nun is holding an illustration of Kateri. This illustration may not be accurate, but clearly it looks nothing like the nun in her get-up. The nun would have to be an idiot to be oblivious to the stereotyping she's doing.

In related news, Indians say they'll dress up as a priest and pretend to molest altar boys the next time a Catholic official visits them. Because the nun's blatant Native stereotyping deserves a response in kind.

Someone should write a letter to the Associated Press and ask them to pull this photo. The AP is a primary source of photos for thousands of newspapers and websites. This photo will be the "face" of the canonization while it's in the news, and whenever it's retrieved from the archives.

For more on Kateri Tekakwitha, see Playing Indian to Celebrate Kateri and Indians Attend Vatican Canonization Ceremony.
Posted by Rob at 11:00 AM

"Someone should write a letter to the Associated Press and ask them to pull this photo."

I should write one to have them keep the photo up. Ridiculous things like this need to be exposed, not covered up.

The person who made this comment should save their energy for those responsible, not those who report it.

Exposing a stereotype only works if you make its problems obvious to the uninitiated. Simply repeating the stereotype, which will happen if AP reuses the photo, isn't enough.

Unless the photo is accompanied by commentary like mine, most people won't realize it's ridiculous. They'll take it at face value as a genuine "honoring" of Kateri Tekakwitha.

Since AP didn't post a critical comment with the photo initially, I doubt it'll do so down the road. I'd rather see the photo pulled than reused uncritically.