Another good posting by Adrienne Keene in her Native Appropriations blog:

We live in a culture of violence, and it needs to stop 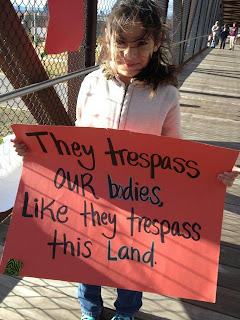 The Heart of Darkness: The River of America's Violence Runs Through Newtown

By Mark KarlinAnd his conclusion:

A couple of my tweets on the subject:

While #Newtown is the 2nd largest massacre by one shooter, recall that the US Army has collectively massacred hundreds of Indians at a time.

Eliminating people you don't like with a gun: from Columbus to Sand Creek, Wounded Knee, Columbine, and now Newtown, it's the American way.

A brief exchange on this point:I'd say gun-nuttery and our treatment of the mentally ill are flip sides of American culture. We don't help those in need, like the mentally ill, because that would make us seem "weak." We do tout the cult of rugged individuality, where everyone solves his own problems, often with a gun.

And these same factors heavily influence our approach toward Indian tribes. We don't give them the help they need, even though we're contractually obligated to via our treaties. And we do (or did) shoot them when they were a pesky problem in the way of progress.

So yes, it's all related. This incident is related to every other incident throughout American history, starting with the first Indian Columbus killed.