Manitoba PC youth party leader quits over racist commentsComment:  To point out the obvious, Natives have served in military in great numbers. They're part of Canada and its military, not something else.

And Canadians built the military base, as they "built" the whole country, by taking land that didn't belong to them. That's the basic issue here, not the sanctity of one base.

For more on Indians as welfare recipients, see Indian Programs = "Welfare"? and Mine CEO:  Natives Have "Hand Out."

Below:  "Braydon Mazurkiewich, seen in a Facebook profile picture, resigned as president of the PC Party's youth wing over racist comments he posted on the social media website on Friday." (Facebook) 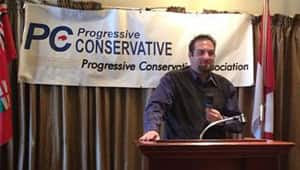 Those were the words Opposition Leader Brian Pallister used Thursday to describe racist comments made last week by the former president of his political party's youth wing.

"I've spent a long time in my life advocating and fighting for aboriginal rights and for aboriginal people," Pallister said. "So has the Progressive Conservative Party of Manitoba.

"To believe that we're going to get anywhere as a province if we don't stand shoulder to shoulder with one another is a mistake."

Pallister's comments came as several members of the aboriginal community considered asking Winnipeg police to investigate Braydon Mazurkiewich for allegedly committing a hate crime, a spokeswoman for the Assembly of Manitoba Chiefs said.