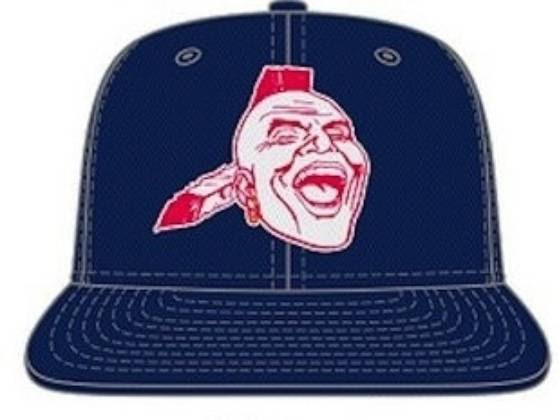 As with almost any instance of racism and stereotyping, white people crawled out of the woodwork to defend their "right" to belittle others. Adrienne Keene tackled some of them, beginning with those who criticized Lukas's "Grade: F" above.

The Problem With the New Braves Practice HatRob weighs in

One mascot lover wrote a whole column defending the cap:

By JR FrancisSome admirers said this column was "perfect" and they loved it. To which I responded:

The people who "love" this article must've skipped the parts about how old and popular the clownish mascot is. Because those arguments are irrelevant and have nothing to do with the current protests.

"It shows them as selfless, honorable, and to be respected." Hee-hawing like a donkey (your claim) or screaming (the Native claim) is equivalent to selfless and honorable? I guess you don't have the slightest idea what "respectable" means if you think a braying "brave" is respectable.

I could add that a Mohawk from the Northeast has nothing to do with the Indians of Georgia. That alone makes the logo false and stereotypical. But why bother, since mascot lovers aren't amenable to reason? They love their traditional examples of racism and the feelings of superiority these examples engender.

For more on the Atlanta Braves, see Origin of the Tomahawk Chop and Animals, Objects, and Professions.

Below:  "Hee haw! I'm a savage brute who either laughs like a donkey or screams like an ape."

Now, after much backlash, the Braves are considering changing the design, according to Paul Lukas of Uni Watch.

Lukas blogged this morning that ESPN's column last week on MLB's new batting practice caps "generated so much controversy and backlash that the team may end up switching to another cap logo. "If that happens," writes Lukas, "expect MLB to issue lots of revisionist-history talking points about how the Indian design was just 'one option we were exploring' and that it was 'in development but never finalized' and that the Braves simply 'opted to go in another direction' or some such.'"