In a Facebook posting about gun control, "Melvin" dismissed my online activism:My response:

My minuscule efforts may well be for naught. But doing nothing definitely won't accomplish anything. Talking about it and advocating change is the only way to get the ball rolling.

P.S. I couldn't care less about your opinion of my postings, Melvin. But I don't just post on Facebook. I have a permanent archive of my thoughts at BlueCornComics.com. I write articles, blog, and tweet. People have used my postings in books and classrooms. So I'm doing my part as a writer, which is the best use of my talents.

I also post news at Pechanga.net, in my blog, and on Facebook. Disseminating other people's ideas is about as good as disseminating my own. It contributes to the national dialogue on the issues of the day.

I would've made a great lawyer...but lawyers work for clients. They don't get to advocate whatever changes they want in public policy. Politicians have to raise money and kiss babies, neither of which I'm good at. And they have to compromise their principles, as Obama has proved.

Writers influence the world via books, movies, articles, TV shows, websites, and other forms of media. I'm doing that too, on my own small scale.

I tweeted and posted some more thoughts on the subject:

Another one for you, Melvin.

I've blogged about a few dozen successful protests. And that's just in the extremely narrow field of Native stereotypes. There must be thousands of examples of people who have changed something just by writing about it online. Maybe millions at this point.

And "changing something" doesn't begin to include all the cases of influencing public opinion. Every cultural meme is now started or disseminated online. That includes such major memes as "Republican war on women," "Romney is a liar," and "Big Bird and binders." Political memes like these helped reelect Obama.

Someone else added:I don't know if I've changed anybody or they've changed me. I just think networked, crowd-sourced activism is the way to go. Rather than a hundred people carrying signs in one place, or a thousand people signing one petition, you can have a million people saying the same thing from a million locations, demanding change together. That's powerful.

Below:  Painting Bush as a warmonger, liar, and buffoon ultimately got Barack Obama elected. 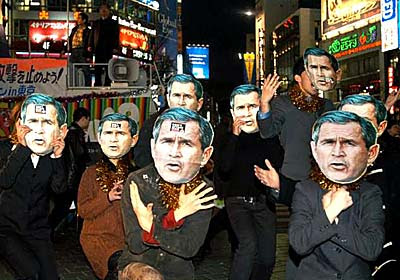 In another exchange, "Brad" said he unfriended Facebook "friends" who never chatted with him. My response:

I agree with your approach, more or less, but I kind of consider myself an activist on racial and stereotyping issues. So I need an audience for my views. I don't actually want to interact with most of these people. I just want them to listen.I'd say most of my FB friends are neutral or apathetic about racial and stereotyping issues. Moving them into the concerned category is one goal.

This is especially useful when you're talking about youngsters who are in high school or college. Who knows? One posting may awaken them to the world of social injustice and set them on a whole new career or life path.

Even with like-minded people, it's useful to post the best articles and analyses. Friends can share these items with their neutral or apathetic friends. Ideally, the educational value of these postings ripples outward and spreads throughout the population.

I'm not sure change happens by educating people one by one. I think it's more of a wave phenomenon. You create social memes and, as I just said, they spread throughout the population. People aren't necessarily convinced by listening to good arguments. Rather, they see which way the wind is blowing and the trend is trending. They hop on the bandwagon so they won't be left behind.

The civil rights movement is probably the best example of this in our lifetimes. It's not as though most people started meeting blacks or interracial couples and learned, through firsthand experience, that they were just regular folks. Rather, society as a whole declared that racism was bad and evil.

Most people didn't care one way or the other about blacks but were suddenly forced to think about them. A few people said, "Hell no, I'm not going to give up my white power and privilege for those blacks." But more said, "I don't want anyone to think badly of me. I'd better evolve my views a little to accommodate those blacks."

We see the meme-creation process in a variety of circumstances. The negative:


Now we're using the Newtown "opportunity" to do the same with gun control. Again, I don't expect to convince individual gun owners that they're crazy to stockpile weapons against an imaginary Obama or doomsday threat. Rather, my goal is to create a wave of public opinion that washes over the convinced and unconvinced alike. If we create a "sense" that guns are as bad as cigarette smoking or drunk driving, we'll win.

For more on protests, see "In Your Face" Approach Doesn't Work? and Are T-Shirt Protests Worth It?

And the grand prize here is Tunisian rebels finding out what America thinks of their government and thinking America will help them overthrow Ben Ali. Domino effect ensues.