Reviews of Stand-Off at HWY #37

“Stand-Off at HWY #37” Examines Military Stand-Up then Stand Down in, as yet, Unexamined Places

By Ellen DostalStand-Off at HWY #37 by Vickie Ramirez: Press Photos

I attended a performance of Stand-Off at HWY #37 this afternoon. Later, I briefly discussed writing plays with Facebook friend Brad:

Alas, I didn't think the play was that good. The majority of it was people saying or shouting talking points at each other.

If you embedded that much conflict in, say, a novel, it might work. But as a 75-minute drama of nonstop harangues, no.I'm surprised that so many plays come out that way. You have the same amount of time as a TV show of 1-2 hours. But TV writers understand that you should build up to a few emotional moments--usually at the commercial breaks and at the end. Playwrights think nonstop conflict is the way to go. Wrong.I'd blame this one on the writer and director. It's not like the actors were hamming up a few dialogue lines of conflict. They had no choice because most of the lines involved conflict. You'd have to double the play's length, at least, to add some natural "breathing space" between the lines.On the positive side, Stand-Off at HWY #37 presented a variety of modern-day Indians free of mistakes and stereotypes. It addressed a wealth of issues that never reach the mainstream media--that most Americans don't know about.

It would take a few rewrites before I could recommend it. But the raw material of a good play is there.

Below:  Eagle Young as Private Thomas Lee Doxdater and Kalani Queypo as Darrin. 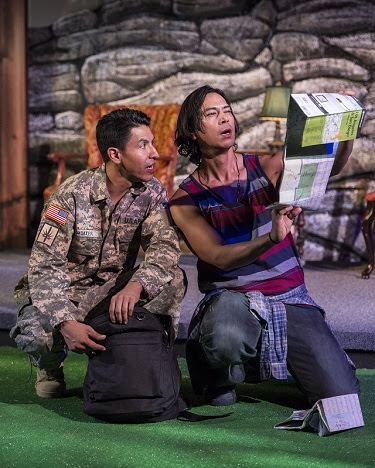