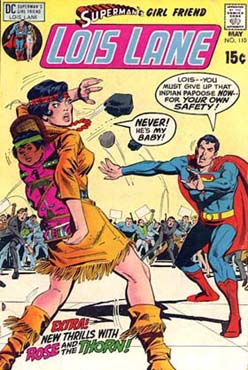 Superman eliminates the threat but an Indian woman is injured. She gives Lois her baby Little Moon, leading to:
Posted by Rob at 2:51 PM

Writerfella here --
Oddly, though it only is a comic book story, the gist about 'Natives-only' when it comes to adopting and/or raising Native children became the truth in real life, in many states and among many tribes. Unfortunately, it also guarantees hundreds of orphaned or abandoned Native children a life without parentage or families. It is a painful and shameful issue that nowhere is near a realistic resolution...
All Best
Russ Bates
'writerfella'