Some background on California tribes that have renegotiated their gaming compacts. The so-called "big four" aren't the first to take this route.

Oakland Tribune, Jun 22, 2004 by Steve GeissingerComment:  So the "big four" tribes didn't oppose the five Dickstein tribes when they renegotiated their compacts four years ago. But now two of the Dickstein tribes--Pala and United Auburn--oppose the big four for doing what they did previously. I guess turnabout isn't fair play when you're a Dickstein tribe trying to protect your interests. 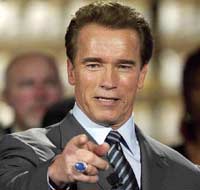