Bury My Heart shut out

Golden Globes pass on 'Bury My Heart'Comment:  Bury My Heart goes 0-3 in the categories it was nominated in. It wasn't even nominated for its writing or directing. That sounds about right to me. 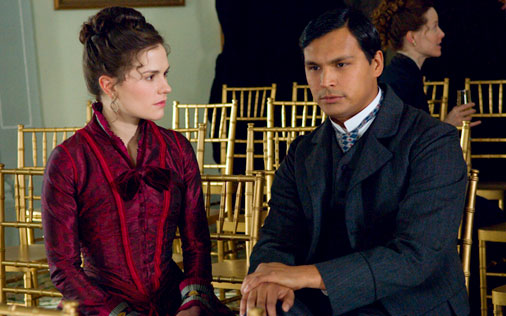 Writerfella here --
Counting in the fact that the Golden Globes are selected by less than 100 members of the 'Foreign Press,' they basically are meaningless to American culture, therefore. Good try, though. Perhaps BlueComix or whatever you call yourself can initiate your own awards presentation on narrow-cast TV...
All Best
Russ Bates
'writerfella'

After two years you don't know what my operation is called? It's Blue Corn Comics, dummy.

I'm already awarding the coveted Stereotype of the Month and Year designations. Perhaps I'll make a video of 2007's losers when I announce them.

Writerfella here --
Not THIS year, as the writers' strike reduced the Golden Globes to a pedestrian press conference that few watched and we even may see the Academy Awards similarly trivialized. And your website as easily could be Blue Duck Comix for all the recognition value the name now possesses for the mainstream...
All Best
Russ Bates
'writerfella'

Hm-mm. My "recognition value" still doesn't explain why you didn't know the name. Having trouble with your reading comprehension again?

Re my name recognition:

Rob on the screen

Summing up the Eiteljorg event

I suppose you could argue Blue Corn Comics' 50,000 hits per day, Newspaper Rock's 1,000 hits per day, Indian Comics Irregular's 700 subscribers, et al. aren't part of the mainstream. No matter. Whoever these people are, my words and ideas are reaching them.

I wonder how many people read the last short story you published. 1,000? 10,000? Almost 20 million people per year are reading my website. Even more are seeing my work at PECHANGA.net. So I'll happily take my influence on the Native and mainstream cultures over yours.

Writerfella here --
Well, perhaps writerfella can pick and choose the names of computer websites that he visits, dependent upon what those websites mean to him personally. Oh, look! There goes that same bunny rabbit!
All Best
Russ Bates
'writerfella'