The movie 10,000 B.C. is instructive for what it says about Hollywood's perceptions of indigenous people. Let's go through the mistakes and stereotypes to compare Hollywood's version of indigenous culture and history with the real thing.

But note: When I say "mistakes," I'm not talking about the anachronistic inaccuracies. E.g., the presence of domesticated horses, metal, sailboats, and pyramids in 10,000 B.C. Many critics noted these "mistakes," but they're relatively easy to explain.

Many critics also slammed the movie's rapidly changing geography, but it's possible to explain that too. The tribesmen start in snow-covered peaks--perhaps the Caucasus Mountains between the Black Sea and the Caspian Sea. They pass through what looks like a rain forest--which may be the "lush forests of what is today Southern Iraq/Kuwait--the fabled Fertile Crescent." They cross the Sinai Peninsula and end up on the Nile River.

No, I'm talking about more subtle mistakes and stereotypes. These have the cumulative effect of making indigenous people seem much more primitive and superstitious than they really were. To Hollywood, these people are basically ape-men with good plastic surgeons.

The Yagahl tribe lives on a mountain. The surrounding peaks are covered in snow, showing how cold it is. But the Yagahl huts are on top of a rise, exposing them to wind, storms, and freezing temperatures. This is silly; no tribe would choose to live in the coldest spot in the region.

The tribesmen have braided and dreadlocked hair, mud and paint on their faces, and dark makeup around their eyes. This serves to make them look more exotic and otherworldly--i.e., primitive. If they didn't have these excesses, they'd look almost modern.

During the day, the men often go bare-chested. Even though it's sunny, this is still a mountaintop with snow-covered peaks nearby. They should be wearing shirts if not coats--but again, being half-naked makes them look more primitive.

Evolet the orphan girl arrives to fulfill a prophecy about bringing life to the tribe. Her name is unnaturally soft- and French-sounding, reminiscent of the first woman Eve. It's obviously a gimmick to make her seem more feminine.

Because of Evolet's blue eyes, the tribe knows she's different, special, anointed. Couldn't she have had a birthmark or a wart on her nose? No, it has to be the Anglo epitome of beauty to mark her as the tribe's savior.

The rest of the tribe looks suitably Eurasian. A couple of the actors have Chinese or Asian surnames; one is Maori. But Evolet is played by Camilla Belle. Despite having a Brazilian father, she looks like Lindsay Lohan. She's totally out of place among the others--a typical Hollywood starlet playing a typical Indian-style princess.

Our hero D'Leh tells Evolet he's discovered a star that behaves strangely--i.e., a planet. In reality, most indigenous tribes knew about the planets. They marked the seasons by them. They probably did this for tens or hundreds of thousands of years before 10,000 BC. So portraying D'Leh's observation as if it were brand-new makes tribal people look ignorant.

Like Indian buffalo hunters, the Yagahl hunters crawl amid a herd of mammoths. Then they spring up, shout, and wave their arms to goad the beasts. This is more foolhardy with mammoths than it is with buffalo, since the animals can crush the hunters with one misstep.

For that matter, why not drive them off a cliff as the Indians did with the buffalo? These tribesmen take more risks and hunt less efficiently than their Paleo-Indian counterparts in North America. They're a white man's fantasy of a tribe, not an anthropologically accurate tribe.

Below:  Those lips, those eyes! "Leave me alone, you big hairy paparazzi. I have a photo shoot tomorrow and I need my beauty sleep." 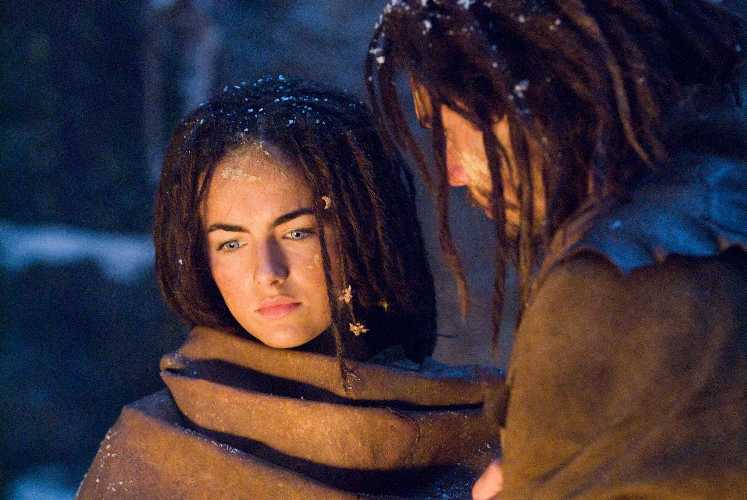 The Detroit Auto show is on.

"Evolet" sounds like the name of some "green" concept car from Chevrolet, that will be seen spinning slowly on a turntable, with 2 or 3 lovely models standing here.

"It's a new evolution in automotive experience...."

You said it. "Evolet" sounds like something made up and tested in a focus group, not a real indigenous name.

While we're pointing out stereotypes, what does "suitably Eurasian" look like? Especially 12,000 years ago.

Also, how do you know what Pleistocene "indigenous Caucasians" would like in terms of representations of themselves?

I agree about the blue eyes trope, and nobody ever gets Pleistocene hunting right.

I wonder if mammoths could be stampeded. If they behave like modern African elephants, than no. Fact is, we don't know the ethology of mammoths.

"Suitably Eurasian" looks like a wide range of people with a blend of European (white) and Asian features. It doesn't look like Lindsay Lohan or someone else who's pure Caucasian.

As for your second question, I'm not sure what you're asking. How do I know what the movie's tribal people would wear in terms of clothing, makeup, and hairstyle?

I don't know any more than the filmmakers do. But I do know how indigenous people look today. Then tend not to wear dreadlocks, eye makeup, or mud on their faces.

The filmmakers didn't model their tribe on an existing tribe. Nor did they give it a completely new look. Instead, they used a mishmash of stereotypes from different cultures to make their characters seem strange and exotic. This reflects a Western bias against indigenous people.

The "strange" star was Polaris not a planet. All of the other stars seem to rotate around the "North Star" as seen from the Nothern hemisphere.

The young warrior D'Leh is speaking to the young Evolet telling her that she will never be alone, in doing so he uses as an example a "light in the sky that does not move as all the others do."

That could refer to *a* northern star that doesn't move at all. But not to Polaris, since it wasn't the North Star then.

Either way, no one first discovered an oddly moving or stationary star in 10,000 BC. The ancients would've known about it for thousands of years before then.