The 9th Annual imagineNATIVE Film + Media Arts Festival Ends Another Successful Year and Hands Out A Host of AwardsComment:  For more on the subject, see The Best Indian Movies.

Below:  A scene from Rabbit and Bear Paws. 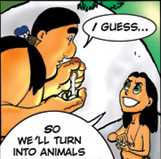