In Rob Doesn't Understand "Mutts"? correspondent DMarks raises another question about who qualifies as an Indian:My response: This is a two-part question.

1) Re completely white wannabes: I'd say they'd have to be widely or generally accepted as Indians by Indians to qualify. A few Indians saying their white colleague qualifies as an Indian wouldn't be enough.

Take someone like Ward Churchill...please. Since he fails to meet the other criteria, it comes down to whether the majority of Indians accept him as Indian. Ten or twenty years ago, they probably did. Now they probably don't. Hence he's lost the Indian status he once had.

2) Re white men who "married into the tribe": Where's Russell Bates with his tales of the red-haired Kiowa boy when you need him? <g>

I think this case is representative, so I'll post it here:

Frank Baldwin captures mysterious "white Indian" TehanI'm pretty sure Tehan's case is typical. He became a full-fledged member of the Kiowa and nobody discriminated against him based on his race. That's often what happened to foundlings, runaways, and kidnap victims in the olden days.

So the answer is yes. Membership in a tribe is a political decision, not a racial one. Any government, including that of an Indian tribe, can choose to make whoever it wants a citizen.

I'd strongly advise tribes not to accept anyone, including pure-white wannabes, as members. Because that would dilute their strength as groups with cohesive cultures. But in theory, yes, they can do it.

For more on the subject, see The Facts About Tribal Sovereignty.

Below:  Tehan the red-haired Kiowa in Dreamkeeper (aka Archie Morris in ER). 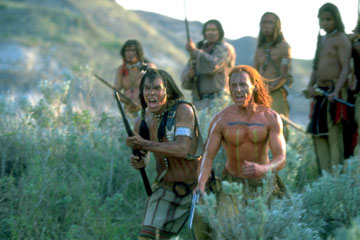 Love the photo of Groundskeeper Willie with the Indians.

Thanks for addressing my questions.

I think I've said this here before, and I'll say it again, just because you are white or may have minuscule Indian blood and know Indian culture or even live with a Tribe DOES NOT make you an Indian. All it makes you is a white person who knows Indian culture. You are still marginally Indian or white!

It's your genetics that make you Indian, whether you were born into the culture or not. You can't claim an Indian identity based on minuscule Indian blood while your dominant ethnicity is white.

And yes Rob, I'm well aware of those damn Cherokees with no blood quantum who are legally Indians and I blame them for this mess that Indian country is now in, over run with fake tribes and wannabes.

Agreed Anon; I've got a tiny bit of Indian blood (I forget which Tribe since it doesn't matter) on my father's side but I don't consider myself to be Native at all. Which isn't to say that I'm some cultureless white man since I'm extremely interested in my Gaelic and Brythonic heritage.

Also - I could be wrong - but a lot of Indians who escaped the trail of tears (or their descendents) were later denied Tribal membership for 'living amongst Whites too long' despite the fact that they were more Native than the 'real' Tribal members.

Also while I'm not very interested in the American Indian cultures; the Choctaw donation to the victims of the Irish famine (which was genocide contrary to revisionist lies) never ceases to amaze me. I'm also intrigued by the Mohawks who fought with the Fenian raiders.