A mascot for white people

Hey, white people! Are you upset that your only sports mascots are occupations? (Cowboys, Packers, 49'ers, Pirates, etc.) Do you wish you too could be honored for your noble ethnic heritage?

Well, here's a mascot for you! 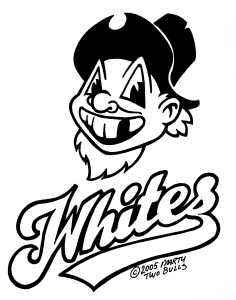 Marty Two Bulls of Indian Country Today gets credit for the drawing. I just came across it in my vast collection of stereotypes and thought it needed posting. What with all the talk of Dudesons and stereotypes recently.

Any resemblance between this stereotype of whites and the Dudesons' stereotyping of Indians is purely coincidental, of course.

Jennifer Yuhas Gall thought this was funny. I suggested she run with it and she did. Here's her posting on the subject:

Cleveland Indians Announce Team Name and Logo Change!Unlike Natives who scorn mascots such as Chief Wahoo, these (fictional) people are totally reasonable. Who'd accept being stereotyped as an ignorant hillbilly? Not me!

I'm sure y'all remember the Fighting Whites intramural team from several years ago:

Similar idea, but as I said at the time, this image misses the mark. It doesn't portray whites in a negative light. As a parody, it's a failure, which is why no one was offended.

Cleetus the hillbilly--can we call him Cleetus Cleveland?--is much closer to the mark. I would've gone further and made the mascot a Klansman in a white hood and sheet. What could be a better symbol of white pride than that?

For more on the subject, see Team Names and Mascots.
Posted by Rob at 1:33 PM

Cleetus Cleveland looks awesome to me. I have no problem with his use as a mascot, but then I've never been the oversensitive type.

Ha! I just read a few more stories. It's really awesome the way you disabled comments on the story in which a genuine native tells you that you're basically a pompous, self-important gas bag.

I especially like how you talked to her like she was an ignorant child (sound familiar?) and insinuated that she was an "Uncle Tomahawk" before making sure that no one else could comment on your arrogance and childish behavior.

To take a page from the award-winning picture book "Rob's Big Book of Go-To Arguments," Why don't you take a walk through the heart of Harlem and tell the first Black Man that says "yes sir" or is in any other way polite to a white man that he's an Uncle Tom? See how well that goes when you don't have a locked blog to hide behind.

It seems pretty clear to me, the casting agent you tried to shut up, and the actor appearing in the show that the Dudeson's are the ones portrayed as the child-like idiots. Seems to me their "Indian Guide" is playing a game of "See what we can get the stupid white men to do."

Anonymous, though I might get quite so harsh in my criticisms of Rob, you do bring up what I feel is a serious shortcoming in his blog. This selective choosing of what posts to allow people to comment on.

I've noticed this trend popping up all to often here, most recently with the "Stereotypes Disappear Organically" post from a few days ago. In that case, I wanted to call Rob for getting increasingly rude and unpleasant with that guy who it seemed was trying to have a civil debate with him, and point out some of the clear double standards and logic holes in his arguments, only to find he'd locked the thread and blocked comments.

When Rob is clearly in the right about something - when he's exposing undoubted idiocy or a highly offensive stereotype - sure, he'll leave the comments open for people to agree with him. But it seems like more often now, when he's entering more hazy territory where it's possible for someone to quite reasonably argue for the other side and possibly outargue him, he'll lock the thread and not let anyone reply.

And I don't think that's really a fair way to go about things. Either put everything you say out there for people to respond to and maybe critique, or say right from the get-go that you're not interested in anyone else's thoughts and the site is only for you to broadcast your views unopposed.

"Anonymous, though I might get quite so harsh in my criticisms of Rob,"

I try to stay civil, but as a white guy, I really gets under my skin when another white guy tries to tell a member of a minority how to act and what's best for them.

I see that kind of arrogance as the root cause of all the problems Rob claims to fight against today.

I know "white" is the term most used throughout American history by Euro-American peoples - and as a consequence "people of color" have followed the example. But I propose that because the actual skin color of "pure" Euro-Americans, particularly those from northern Europe and the British Isles is actually pink and pinkish/white - a more accurate term for "white" mascots would actually be "pinks", "pinkies" or some similar term that truly embodies their actual skin color.

Michael Cooke, the disputant in the Stereotypes Disappear "Organically"? posting, has been slamming me off and on for 25 years. My responses may have reflected that. You shouldn't need to know our history to understand a posting, but if that helps any, fine.

How 'bout the Atlanta Africans? The fans could join in togather doing the Spear chuck. You know,something similar to the Tomahawk chop?

Finally, for Anonymous #1, who actually addressed this posting, the following quote applies:

"No one illustration is enough to create stereotypes in children's minds. But enough books contain these images—and the general culture reinforces them—so that there is a cumulative effect, encouraging false and negative perceptions about Native Americans."