By Joe MontIf you go to the link this article provides, you arrive here:

SavetheTribe.orgComment:  Wow, this sure sounds great. I can't imagine that anyone would agree with these lofty sentiments.

And SavetheTribe.org ("tribe" should be plural, but never mind): Does this mean these tribes will wither away without their payday loan companies? Even though they have casinos? Hmm.

If the point of this coalition is to defend "short-term loans," why not say so? What's there to hide if this is an honest, even noble, business? Let's talk about the honor of loaning money to people in need at exorbitant rates.

I also like the slogan at the top of the page: "Freedom Comes with Responsibility." Does that mean the tribes are planning to exercise more responsibility? Or that they want more freedom without responsibility? I don't know.

In short, NAFCC defends the tribes' sovereign right to make predatory loans. With language that tries to obscure the exact nature of the business. I don't trust anyone who's not open and straightforward, and NAFCC's customers shouldn't either. 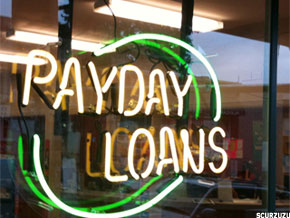 I say let the lenders feed on white people's stupidity. Though casinos are still a much more profitable way to do so.

Where I live here on the Navajo rez, many Navajos utilize these payday loan sharks in town (Gallup, Farmington, etc..). If it's not the payday loans, it the pawn shops, fast cash for your car or truck, etc... that are no better.

The squabbling over the connection between payday lenders and tribes has taken an interesting turn as it has now been framed as a tribal sovereignty/states’ rights battle by a pair of opposing statements released by a Native group and a payday trade organization. The Native group has come out for the controversial tribal/lender connection while the trade group has said Internet-only alliances with tribes don’t conform to its best practices code.