Blogger Stephen Bridenstine continues his report on the Irish sensitivity to Native Americans: 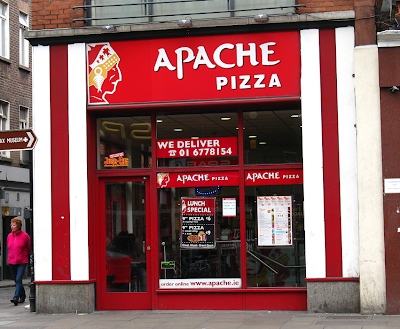 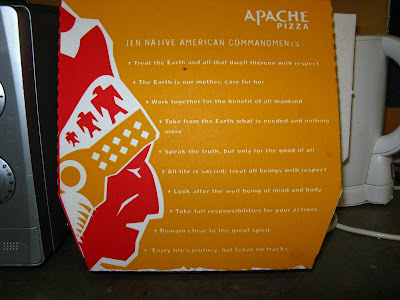 Apache WifeComment:  For more on the Irish sensitivity to Indians, see Showband Critics = "PC Cockroaches"? and Corrigan Brothers Defend "Indians" Showband.
Posted by Rob at 10:33 AM

I'm from Ireland and quite a lot of people over here actually consider the Apache Pizza slogan a bit like something from that escaped through a time-warp from the 1950s in terms of cultural sensitivity.

I refuse to order from them on the basis of their radio advert which consists of a ridiculous stereotype straight out of a 'cowboys and indians' movie from another era.

I also think that in an Irish context, if it were playing on a stereotype of another culture, there would be a lot more upset. It seems that people have just accepted this "cartoon-like" notion of native American culture largely drawn from US 1950s pop culture.

The exposure that most Irish people have to native American culture is through popular cultural. So, unfortunately to me it looks like this pizza chain were trying to do some kind of retro take on 'classic americana' and reflecting those same dated stereotypes back.

That being said, to cross the Atlantic the other direction, I was pretty horrified at some of the ways Irish culture was used in the US to market stuff too. For example, there were bars serving drinks called an Irish Car Bomb which to me is a horrifically offensive reference to the recent terror campaigns in Northern Ireland. It would be like a bar serving a drink called the 9/11.

Then, the use of the term "Black and Tan" in reference to a cocktail and Nike even used it as branding on a shoe that launched on St Patrick's Day assuming there was some kind of Irish cultural link to the term.

Unfortunately, what they didn't realise was that the "Black and Tans" were a British paramilitary auxillary police force that operated in Ireland very briefly before independence. They terrorised the country and had a reputation that was not unlike the Gestapo!

That and people constantly making reference to potatoes in pop culture from the Simpsons to ... you name it. Again, not realising that Irish people aren't fixated on eating potatoes, but in the 1800s half the country starved to death because that was all the was to eat and the crop failed.

Again, it's a rather deeply offensive stereotype and has its origins in 19th century offensive caricatures of Irish people.

All that being said, Irish people are deeply aware and grateful for famine aid that was sent by the Choctaw in 1847 at the height great famine in Ireland.

They recognised the similarity between what they had been through themselves being forced off their lands and forcibly moved (1841 trail of tears) and what was happening in Ireland at the time with millions of people being cleared from their lands and moved to inhospitable lands on the west coast where they couldn't produce food.

The Choctaw nation reached out with a donation that was extremely generous, given their own limited resources at the time too. It is a gesture that was deeply appreciated by the Irish people and that is remembered as part of Irish history and is absolutely burnt into the our folk culture too and even traditional music.

That link is commemorated every year, taught about in schools. Every year a walk takes place to remember what happened and it's joined by members of the Choctaw Nation. Likewise, Irish people mark the Native American Trail of Tears each year.

It's sad to see crass commercial use of cultural stereotypes like this, but please do not let it be your only impression of how Irish people see native American culture.

Hopefully, we have a lasting bond and mutual understanding that goes beyond something that a pizza delivery company or a sportswear goods brand can mess up!