Apparently Callaloo is some sort of Brazilian-style carnival, parade, or event held in Toronto every year.

One slight problem: This year's theme was originally "Native Americas," not "Caribbean Natives." But we'll get to that.

The page header shows an Amazon Indian in mask-like paint, a hut, palm trees, and a tomahawk and arrow. I think you can see where this is going.

How does Callaloo "honor" Native people? With scantily-clad women pretending to be Indians, of course:

Lost City of the Aztecs

This image's former title was "Sacrificial Mayan Virgins," as you can tell from the image's URL. That tells you all you need to know about Callaloo's exploitation of Native women. They might as well name it "Sex/Rape Fantasy Objects to Boost Callaloo's Bank Account."

In Callaloo Parade and the Sexualization of Native American Women, the Beyond Buckskin blog presents another image from this year's Callaloo: 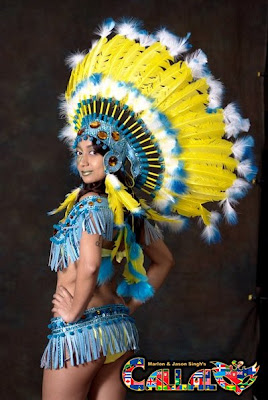 And explains why this is wrong. It quotes Adrienne Keene from her Native Appropriations blog:

Nudie Neon Indians and the Sexualization of Native WomenJournalist Valerie Taliman adds:Comment:  This year's Callaloo is basically a female version of the Irish "Indians" showband. It's wrong for the same reasons.

Originally Callaloo meant to stereotype Natives throughout the Americas as belonging to one primitive culture of scantily-clad savages. Limiting it to "Caribbean Natives"--which stupidly includes Central and South America--isn't much of an improvement.

For more on the Indian princess stereotype, see "Racism, Stereotypes, and the Digitized Indian" and Redbone Told to Wear Buckskin.

Below:  Wrong then, wrong now.