A cultural critic and professor of English talks about roadside Indian kitsch and tells us what it means. (Nothing good, obviously.)

Rader also mentions "The Guardian" statue atop the Oklahoma State Capitol. For my comments on that, go to the end of the original posting.

Below:  A typical "Indian" of this type. Someone may be mass-producing these Indian icons, because it looks a lot like the Howe Chevrolet statue. 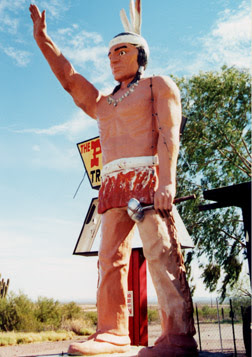