Chilkats in The Far Country

The Far Country is one of the classic Jimmy Stewart/Anthony Mann collaborations. Although it's set in Skagway (Alaska) and Dawson (the Yukon territory), it's definitely a Western. It's notable for what it doesn't say about Indians.

The Far Country (1954)Comment:  No Indians appear in The Far Country and they get only two mentions. First, when Jeff crosses the border into Canada, he asks where the constable is. Out handling "trouble with Chilkats," he's told. Next, when he needs a route out of Dawson, Jeff says he met an Indian, "a Chilkat," who knows a seldom-used river trail.

I was struck by these references because of my recent posting on Flashback in Twilight Movie, which included an 1895 picture of Chilkat dancers. Just think. While the events of The Far Country were taking place, bands of Chilkat Indians lived nearby. Perhaps they were just around the river bend or over the next mountain.

While white men were staking their claims in Indian territory, officials were herding the Chilkats onto reservations. Banning their traditional dances and ceremonies. Sending missionaries to Christianize them. Forcing them to get jobs or go hungry. Selling them liquor to keep them pliable. And dragging their children away to residential schools.

Nor did the Chilkats fade away and assimilate quietly. A NY Times article dated August 16, 1903, screamed about "CHILKAT INDIANS AT WAR." It hinted of savage horrors: a "reign of terror" and "witchcraft." Which probably meant the Chilkats were struggling to preserve their lives and culture against the white onslaught.

Funny, but none of this made it into The Far Country. Yet the above was the reality and the movie was the fiction. Once again Hollywood erased Indians from the picture.

One can just imagine how movies like this influenced a generation of viewers. "Indians in the Northwest? What Indians in the Northwest? I was just watching The Far Country and I didn't see any Indians. All I saw were white men struggling to make the empty land into something useful. To extend the blessings of civilization to this remote corner of wilderness."

Anyway, except for its somewhat rushed and predictable ending, The Far Country is a fine Western. Rob's rating: 7.5 of 10. 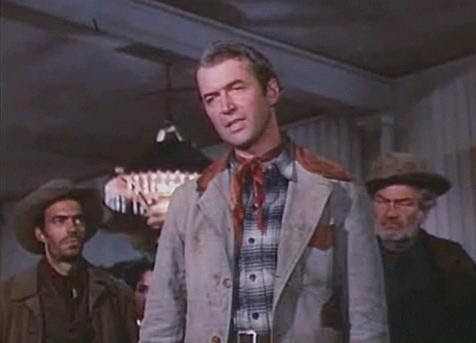