In his response to Trejo a New Ager in Sherrybaby? J. Kills Straight (Lakota Sioux) accused me of being racist. Here's my reply:

Re "a long, drawn out and to be quite honest, incoherent mathematical equation": I can understand how someone who doesn't have degrees and awards for mathematics--who may be ignorant of the subject--might think that. Fortunately, that applies to you, J., not to me.

The point of the "proof"

Apparently you misunderstood the whole point of my Trejo posting. It was not that being Indian requires a certain percentage of anything. Rather, it was that Trejo's character is likely to be Indian because he has some characteristics often found in Indians.

Re "lowering Indians down to mundane math percentages": I didn't use "math percentages" on an actual Indian, bright boy. I used them on a fictional character of uncertain ethnicity to suggest what his ethnicity was. Again, showing a correspondence like this has nothing to do with setting fixed requirements for being Indian.

If you've read my blog, you know I've discussed who's an actual Indian before. Again, it has nothing to do with required percentages. Melvin Martin, your fellow Lakota, agreed with me, so take it up with him if you don't understand my position.

Who knows about Indians?

Thanks for the condescending lesson on the BIA, blood quantum, the 7th Cavalry, "savages," genocide, and so forth. Now tell me something I don't know. Perhaps something I've forgotten about numerical analysis, differential equations, or applied linear algebra.

FYI, I've used the phrase "Bureau of Indian Affairs" 29 times in this blog and "blood quantum" 22 times (excluding this posting). I've known what they meant for decades. Meanwhile, how much do you know about math? Tell us all about your mathematical background.

In case you're as clueless as you seem, my website is one of the leading resources on Native stereotypes such as the "savage" or "uncivilized" Indian. Native educators have used it for their classes, their research, and their books and papers. I'm guessing I know as much about the subject as you do, if not more.

Re "Mathematics in the context you apply it to Indians shows just how maladroit and racist you are": That's funny coming from someone who knows nothing about the widespread Native disapproval of Indian mascots. I suggest you learn more about your own people before you lecture me on them. Talk to the spirit of Vine Deloria Jr. before you belittle his fight against these racist symbols.

Re "Not to say that you yourself are a Neo-Nazi, however, your use of mathematics to infer 'Indianness' implies that you may be": That's funny considering Melvin Martin asked me to explain how he could be 21/32 Lakota, I explained it to him, and he thanked me for it. Again, that was an appropriate use of mathematics within a Native context. Again, I wasn't claiming that someone must meet some mathematical requirement to be an Indian.

Re "Like you, they assigned a numeric system to commit acts against humanity": Are you really babbling this nonsense and expecting people to believe it? FYI, I applied a "numeric system" to a fictional character, not a real person. Do I have to explain the difference between fiction and reality to you, too?!

Your claim that I'm applying "numeric systems" to Indians to determine if they're Indians is wrong and stupid to boot. It may be the most ridiculous claim in this blog since Russell Bates claimed Friday was a Polynesian. A grade-schooler could grasp my position better than you've done.

What would Trejo say?

Regarding Trejo, did you understand the part where I wrote, "One, he's Latino"? If not, let me spell it out for you. I know he's a Latino and I never claimed he was an Indian. My posting was about his character, not him. Trejo could be white or black and I'd still say his character in Sherrybaby--not Trejo himself--seemed to be an Indian.

As for what I know about Indians, do you realize I often post commentaries from such Indian writers as Tim Giago, Winona LaDuke, Sherman Alexie, Suzan Shown Harjo, Jodi Rave, Dorreen Yellow Bird, Kevin Abourezk, Steven Newcomb, Steve Russell, Arigon Starr, et al. Not to mention our own Melvin Martin? And that I generally agree with them? Are you saying I'm ignorant for posting and agreeing with their positions? That they're ignorant for taking these positions? Or what, exactly?

Oddly, I don't recall your ever accusing me of anything before, J. In your previous comments, you've mostly agreed with me and vice versa. Did you just discover I know nothing about Indian cultures? How do you explain your ignorance of my alleged ignorance, eh?

In short, your absurd answer means nothing to the thousands of Indian people who read this blog, my website, and my published articles and comics. They'll continue reading even if you call me names that you can't back up with facts and evidence. Better luck the next time you try to criticize me, friend. You'll need it.

Below:  Danny Trejo as Dean Walker, the probable Indian in Sherrybaby. 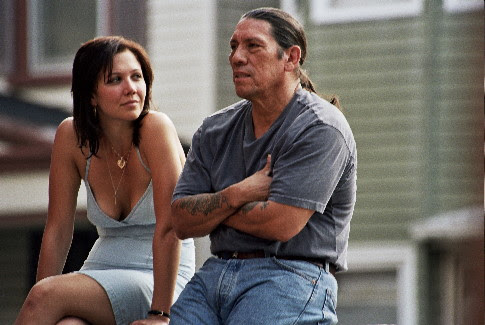 Take a chill pill bud. Did I touch a nerve or what? I have an idea. Let's both go to Pine Ridge and explain your "mathematical fictional Indian equation" to my relatives there.

You would get laughed off the rez. "I have a BA degree in math" says Schmidt. You also are very adroit at BS.

Okay, let's go. I'm confident that any intelligent person will understand my analysis. Notwithstanding your lack of understanding, that is.

I imagine the typical Pine Ridge resident will be like Melvin Martin, who called my analysis unconventional but "brilliant." Again, maybe you should ask him to explain it to you. He seems to "get" things that you clearly don't.

Meanwhile, I have an idea also. Let's both go to the math department of any junior high school and explain my analysis to them. I suspect they'll laugh your misunderstanding of it out of the school. "It may be 'incoherent' to a third-grader," they'll say, "but not to anyone who's graduated from elementary school."

Finally, let's note all the points you failed to address. Such as your ignorance of what I know about Indian country. I guess my answers were too hot for you to handle, eh? I hope you'll educate yourself next time before you pop off about things you don't know.

P.S. Take a chill pill yourself, bud. You're the one who wrote a ten-paragraph response to a posting that had nothing to do with you or your Lakota people. Mind your own business if you don't want me to ridicule your ignorance of mathematics and me.