It's been a year since Russell Means and company established the Republic of Lakotah. How has the newest "Indian nation" fared?

On the one hand, Means hasn't been arrested or jailed for flouting US laws. He's still free to proclaim his Lakotah beliefs. I expected him to be on trial by now, so that's something.

On the other hand, Means hasn't achieved anything. Tellingly, he downplayed his gambit when he ran for the presidency of the Oglala Sioux Tribe, claiming the OST is Lakotah. Nobody is talking about Lakotah and everyone has forgotten about it (except Newspaper Rock's readers, natch). 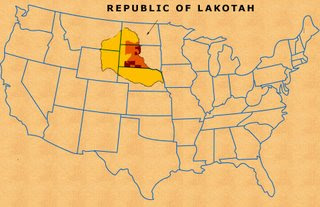