Art show about FBI and Indians

‘Freedom of Information: The FBI, Indian Country, and Surveillance’

By Staci GolarWhat it's about:Some of the participants include poets:And artists:Comment:  For more on government oppression, see CIA Suppressed Sainte-Marie's Music. For more on Indian activism and AIM: 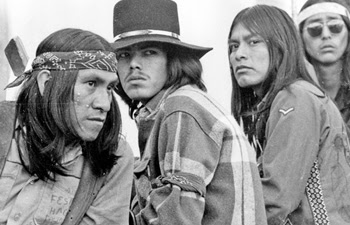 Wow, it is about time! I have in my possession a publication called, "Voices From Wounded Knee; 1973", published by Akwesasne Notes. It details radio transmissions; photographs from the inside; meetings with the Federal government; meeting within the American Indian Movement and other inside details of the standoff. I see parallels in the US Government and private mercenaries practices in current conflicts in Iraq and Afghanistan. I am in constant arguments and debate with Oklahomans that refuse to see things outside the bubble.

While I agree with the '10th Little Indian' about the timing on such an event, I don't understand the Oklahoma bashing. Granted that the tribes that reside in Oklahoma don't live on reservations and enjoy our sovereignty differently from those who live on the Reservation. That doesn't mean that we don't understand, haven't lived or don't empathize with the plight of all of Native America -- thus the creation of different organizations that strive to maintain the rights of Indian Country as a whole.

Despite what you think, it is the duty of every Native American who has success to give back to their nation. That is the only way that all Native Americans will have chance and opportunity to succeed. I see this every day; I have friends who work dilligently to achieve goals that help their respective tribes -- whether it be in education, health care, political rights or business matters. I would not have the education that I have today had I not grown up in Oklahoma. Or would I have a college degree if it weren't for being born into a specific blood line -- more specifically I would owe a hell of lot more in student loans.

The tragedy of Wounded Knee should never be forgotten -- and will not be forgotten or forgiven as long as Peltier remains a political prisoner. I am proud that someone saw fit to bring the issues that surround that massacre and other atrocities of that era in Native American History into the broad mainstream. It will be interesting to see what type of reception this event will get.