Here's an update on the lawsuit described in Battle for Jim Thorpe's Body:

Olympic Great Is Buried Near Poconos, But Son Wants Him Home in Oklahoma

By James R. HagertyComment:  The interesting thing to me is how they took one Indian term--Mauch Chunk or "bear mountain"--and replaced it with another. The second term had nothing to do with the region; it was simply a marketing ploy. Euro-Americans have come up with weak reasons for changing Indian place names, but this one is among the weakest.

How about embracing the location's Lenape Indian heritage instead? Create a memorial or start a festival to them, not to an Indian from across the nation. And don't cry over the loss of Thorpe's remains when your motives were so transparently commercial. 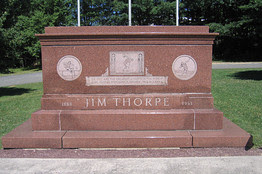