Continuing the argument begun in Devil's Advocate Defends Saginaw Grant, here's more of Michael Cooke's defense of the Dudesons' racism:Saginaw Grant was paid for a one-time appearance on one Dudesons episode. I don't think the Dudesons plan to use him again. So there's no job for him to lose at the moment. Try again.

"Make MTV wary of using minorities in programming" is the kind of rationalization for which you have zero evidence, I'm pretty sure. But surprise me and prove me wrong. Let's hear your best examples of how Hollywood stopped using minorities because they protested their treatment. Give us hard facts, not idle speculation.

This is the same argument Michelle Shining Elk offered in her defense of Saginaw Grant. Protesting will only make Indians look like angry malcontents or helpless victims, she claimed. Or perhaps it was helpless malcontents or angry victims. Since she made up these scenarios out of thin air, who knows?

In any case, the claim is that Indians should accept racism because the alternative is worse. How so? In the Michelle and Michael fantasy world, apparently MTV is poised to make a whole series of racist TV shows. Only the silence of Indian activists is limiting the damage to one show.

Yeah, right. Can you say "complete fabrication with no basis in reality"? I know you can.

We even have a phrase for uppity Indians, or anyone who causes trouble. We say they've "gone off the reservation." Good little Indians stay where they're supposed to be and don't raise a fuss. Even when they're getting food with mold and blankets with holes from the government. "Bad" Indians go "off the rez" and protest these conditions.

Back to Michael Cooke:

I love how you're working your way through the top 10 excuses for the Dudesons' racism, Mike. Clearly you don't believe any of them sincerely. You're throwing them up and hoping one will stick. Good luck with that.

Your longwinded defense of a show you haven't seen demonstrates your cognitive dissonance over your "stereotypes fade organically" fallacy. You want to believe activists are wasting their time so you can justify your lack of effort. If we simply go on without lifting a finger, you hope, Native and gay stereotypes will disappear and all will be well.

Unfortunately for you, it doesn't work that way. Stereotypes of blacks and women as inferior human beings persisted for centuries. They persisted until social activists criticized and protested them in the '50s and '60s. Without the protests, these beliefs might've persisted indefinitely.

Again, there's zero evidence that they would've disappeared "organically." And zero reason that minorities should've waited for these mythical events to happen. Activists made the stereotypes disappear by challenging them: with books and articles, letter-writing campaigns, and marches and demonstrations.

I've listed many protests that have curtailed racism or stereotyping. I could list many more. Therefore, your opinion that this is about what I "feel" is flatly wrong.

I'm telling you about proven techniques for challenging stereotypical beliefs. You're countering with fact-free speculation about these beliefs disappearing without intervention. The only one dealing in feelings here is you.

Looks like you're desperately seeking reasons for letting racism and stereotyping continue. I'm not sure why, but I'm guessing it has to do with envy. Activists are working to change the world and you aren't, so you want to bring them down. They're making you look bad with their efforts.

This is why I've accused you of defending racism: because that's what you're doing. Don't protest MTV's racist programming because the protest might offend someone? In other words, don't be uppity troublemakers? Just lie back and enjoy it? You're telling Indians they should accept racism, which puts you on the side of the racists.

Below:  "No, ma'am. I wouldn't think of protesting America's racism. I'm as happy as a clam with my second-class citizenship." 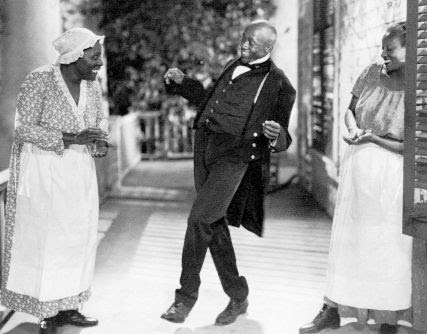 The argumaent that protesting this episode of the Dudesons may make MTV wary of "using" ethnic minorities in programming in the future is especially ludicrous! if this is the manner in which they will portray minorities, who would WANT them to continue doing so?