The University of North Dakota's Fighting Sioux mascot is almost dead and gone. But in a two-part posting, Adrienne Keene offers a good summary of the arguments against Indian mascots. Note that these arguments apply not only to mascots but to Halloween costumes, hipsters in headdresses, and related stereotypes:

The Fighting Sioux are back: My passionate plea against Indian mascots 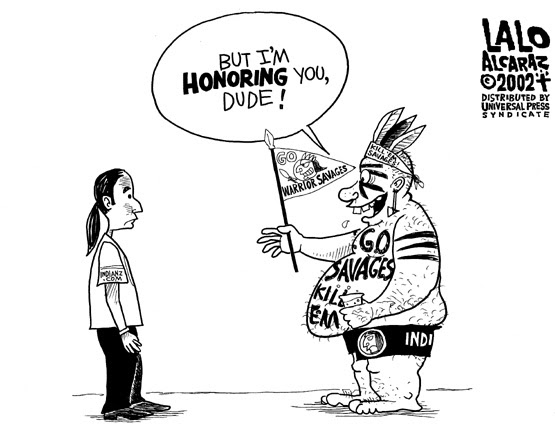 " Native peoples are still living under colonial rule--take a look at stats from any area of society, and you'll see Native people at the bottom"

This is not the best of the arguments. Central to it is the idea that poverty means colonization.... well there are a hell of a lot of poor people of all colors who are not indigenous.

As a casual argument, it seems fine to me. All she's saying is 1) that Natives are generally worse off than people in other ethnic groups. And 2) that this is caused by government policies, not just by economic factors.

Some of those studies (depression) leave out It seems at first reading, the native American student "control group." There is enough other source anyway. My father hated polish jokes. Of course he was forced from a homeland where he was a native. About 3 million non-Jewish Poles were murdered. Good perspective all around yet assuming asses will always be around, also please look deep inside and find self strength of joys.